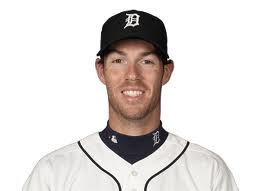 The Nationals announce they have acquired starting pitcher Doug Fister from Detroit in exchange for utility infielder Steve Lombardozzi, pitcher Ian Krol, and minor league pitching prospect Robbie Ray. Some may think the 3-for-1 trade is lopsided in Detroit’s favor, but I don’t think that is true.  Yes, Lombo can virtually play anywhere, Krol was pretty good last year as a call-up, and Ray was phenomenal in Single-A Potomac.  But Fister is better than all 3 put together and fills a hole with the 4th pitcher in the rotation. The Nationals now have the best pitching rotation in the major leagues.

The Nats were looking to fill out their starting rotation.  Dan Haren’s contract expired after the 2013 season, and due to his struggles nobody really thought he would come back. Haren just signed with the Dodgers, and it looked like some combo of Detwiler, Jordan and Roark would be the back end of the Nats starting 5.  Now, we have Stras, Gio, J-Zimm, Fister, and a fifth (probably Detwiler or Roark).

Fister went 14-9 in 2013 with the Tigers. Doug has years of experience; he signed with Detroit from the Mariners in 2011.  He’s also played in the postseason.  He gets a lot of ground ball outs.

I have to say, the only way the Tigers could have made the deal better for the Nat would’ve been to throw in a Ramon Santiago (as a utility infielder) or Hernan Perez (back-up catcher) to fill the Nats’ other holes.

I may be most sad to see Lombo go.  The good news for him is that he is moving from one contending team to another. He was from the DC area and probably loved playing for his home team.

Also, most people may not have heard of Robbie Ray.  He’s now the third best prospect for the Tigers.  I actually voted for Robbie Ray in third place as the Minor League top performer of 2013 in the DC-IBWA ballot.

I was expecting the Nats to try to get David Price or a Max Scherzer this offseason, but Fister will bring quality innings to the staff. Doug, good luck to your stint with the Nats. I hope to see you pitch, and I think you’ll help us get THAT TROPHY HERE TO DC!!!!!