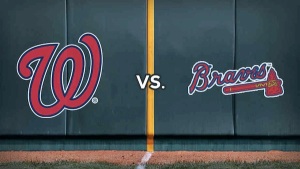 The Nats started the 2014 Opening Series with a sweep against the Mets.  They come home to Washington for the home opener, with games against the Atlanta Braves on Friday, Saturday and Sunday in games 4 through 6 (which also happen to be on April 4-6).

Even though they are an NL East team, the Mets are not a big threat to the Nationals. The Atlanta Braves that are the Nats’ biggest rivals.  The Braves gave the Nationals a lot of trouble last year and won the Division. Here is my scouting report of the Braves’ strengths, weaknesses in, and what the Nationals need to do to win.

What’s Going Well for the Braves? The Braves took 2 out of 3 in the Opening Series from the Brewers.  One of their strengths this year, as opposed to the Nats, is catching.  Nats starting catcher, Wilson Ramos, was injured Opening Day and will be out for at least a month.  This is where the Braves have an advantage.  Although former starter Brian McCann was traded to the Yankees, Evan Gattis provides a big bat in their lineup and plays some solid defense.  (I have Evan Gattis as a bench player on my fantasy baseball team).  The Braves also picked up former Twins backstop Ryan Doumit, who can also play 1B and OF, which is also what Gattis does. If the Braves have an injury in their outfield, Gattis could do the catching while Doumit plays LF, or the other way around.

What Are Some Shaky Things? The Braves’ lost most of of their key guys in their rotation, as Tim Hudson was shipped to San Francisco, and Brandon Beachy, Gavin Floyd, Cody Gearrin, Kris Medlen, Mike Minor, and Jonny Venters landed on the Disabled List. Julio Teheran, who intentionally hit Bryce Harper last year, got the Opening Day nod and a loss.  They picked up Ervin Santana at the last minute.  But on Friday, David Hale is scheduled to take the mound.

The Nats’ pitching is much better.  Even though the Braves are expected to face the back of the Nationals’ rotation, they skipped Jordan Zimmermann’s start on April 3, so he may make an appearance this weekend.  Who gets the call for the Home Opener?  Right now the Nationals’ website says “TBD.”  Maybe Ross Detwiler (even though he pitched on Thursday) or another surprise.

What do the Nats need to do to sweep Atlanta? 🙂 As usual, the Nats need to be aware of Evan Gattis (“El Oso Blanco”), Freddie Freeman, Justin Upton, and Craig Kimbrel. The Nationals have the back of the rotation on for this series, and the Braves middle of the lineup can be a horror.  B.J. Upton is off to a slow start this year, and Andrelton Simmons (who I also have as a bench player in fantasy baseball) hasn’t made too much noise yet.  The Braves are a good team and a big rival, so don’t expect a sweep.  But taking 2 out of 3 would be great, and, really, just being competitive would be much better than last year.

One of my friends, William Melvin, is originally from Atlanta and is a Braves fan.  I asked him what he thinks of his team this year.  “I think the Braves will end up in 2nd place in the NL East. I think the Nationals are out to win, and the Braves are not as confident.”  If a Braves fan is picking the Nats to win, that sounds good! 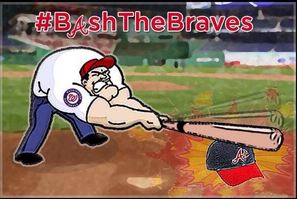