Spring Break fell late this year, so I couldn’t go to Florida for Spring Training. Luckily, a Matt’s Bats reader and professional photographer named  Geoff Chesman took some pictures from the Nationals games on Monday, March 16 in Viera and Wednesday, March 18 in Jupiter. He was also kind enough to give his opinion on what he saw. Since Geoff is an event photographer with ImageLink, I think the pictures are the best part.

This is the first guest post I’ve ever had on MattsBats.com, so here it is!

Monday, March 16
Nationals vs. Astros
Space Coast Stadium
Viera, FL
I had a two-hour plus drive to get to Viera from where I was staying in Boynton Beach. Flying solo, I was able to get up and out on the road to arrive early to Space Coast Stadium. The first thing I noticed when walking out to the field were the Green Hats in honor of St. Patrick’s Day. The thing about Spring Training, of course, is that it’s very intimate. The stadium is small, there are no bad seats, and the players are closer than ever.

We were all treated to a glimpse into a potential future of the franchise with Michael Taylor starting for the injured Denard Span delivering a lead off triple in the first inning. He scored on Ryan Zimmerman’s sac fly.Scary moment in the third inning when Jordan Zimmermann got smacked with a ball right back at him from the Astros’ Robbie Grossman.  But Zimmermann is a tough pitcher and he bounced right back up and threw to first but it got by Ryan Zimmerman and Grossman reached third on the error. Jordan stayed in the game, eventually giving up a single to the next batter Jonathan Villar for a run. 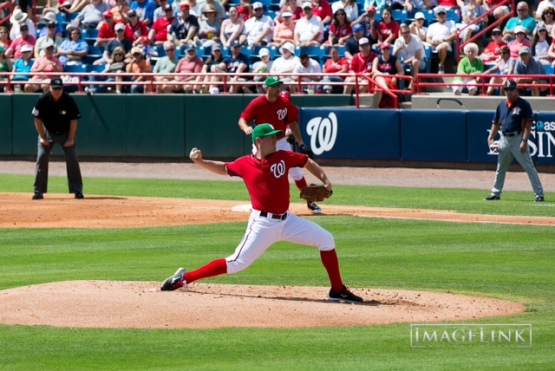 In the fifth inning, Bryce Harper baited the Astros Left Fielder Alex Presley into trying to stretch a single into a double. Harper gunned him down at second. Lesson learned – Don’t run on Bryce! By the time Clint Robinson tripled home Tony Gwynn, Jr. in the bottom of the seventh inning to take the lead for good, I was comfortably resting on the grass in the shade of the scoreboard in left center. Overall a beautiful day to be at the ballpark and I liked what I saw from Jordan Zimmerman picking up where he left off last year. Nats win 2-1.

Food Report – Since this is the 10th anniversary of our beloved Nationals, I had an Italian Sausage in an homage to our tradition at the old RFK vendors. Unfortunately the link was a little overcooked and dry and the fries were uninspiring.

Nationals vs. Marlins
Roger Dean Stadium
Jupiter, Florida
Jupiter was only a 35-minute ride and I liked the ease of parking and the location of the stadium in Jupiter. I arrived early again and got a chance to get up close and personal with pitching coach Steve McCatty and center fielder Michael Taylor. 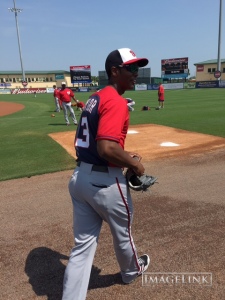 Michael was kind enough to autograph a ball for me too!
It was nice to see former Nationals Jhonatan Solano and one of our favorites, Michael Morse, now playing for the Marlins.Miami starter Mat Latos looked good early while the Marlins mostly starting lineup hit Fister tallying two runs on six hits. Clint Robinson keeps hitting the ball hard with a home run to lead off the fifth inning to stake the Nats to  one run lead. It was nice to see a consummate pro like the 41-year old Ichiro Suzuki, a veteran offseason acquisition for the Marlins with a triple late in the game.
I checked out the Berm in right field which is a great little place to camp out for the game if you get the special Berm tickets.

Former Nats backup catcher Jhonatan Solano singled home his brother Donovan in the eighth inning and the Marlins held on to win 5-4. Another beautiful day at the ballpark when I hear there’s cold rain and snow in the Northeast.

Food report – There were some interesting food options including some creative hot dogs I was not courageous enough to try…I had a Sonny’s Bar-B-Que pulled pork sandwich with Mac and Cheese. Apparently Sonny has been in business since 1968 so he knows a thing or two about Bar-B-Que. The roll was a little thick but the meat was flavorful and tender and had a tasty sweet tangy Bar-B-Que sauce.

Overall, I loved chasing the Nats around Florida for a couple of days and feel lucky to have had the time to make some new memories with my favorite baseball team. I can’t believe it’s been 10 years since Livan Hernandez tossed out that first pitch at RFK. With a loaded pitching staff and a balanced lineup, this team is full of promise once again heading into the season as paper favorites. Let’s see if we can finally break through this year and deliver on that promise.
Check out Geoff Chesman’s online portfolio at www.geoffchesman.com/portfolio and his ImageLink website at http://imagelinkphoto.com/