Behind the Scenes at Seattle’s Safeco Field

Over the last couple weeks, my family took a vacation to the wonderful West Coast cities of San Francisco and Seattle.  Living here in DC, I don’t get a chance to watch too much West Coast baseball, but love the chances to see those teams play whenever I can.  So it was great when we were invited by the Seattle Mariners to come to a game and go behind the scenes at Safeco Field.

Safeco is a very nice ballpark. It actually reminded me a lot of the Rockies’ Coors Field, which we visited last year.  I would definitely recommend a game there to anyone who is going to be in the Seattle area during the baseball season.  The ballpark is celebrating it’s 17th birthday this year, but it still looks brand new due to impressive housekeeping.  You’ll never have to worry about a rain delay in Seattle, as Safeco has a retractable roof that can open and close in 15 minutes.  The people who work at the ballpark are probably the friendliest of any I have ever visited.  There are lots of great food options, an interactive Mariners Hall of Fame, and it’s very easy to get to from downtown via the Link train.  The Mariners have a great team this year, with stars like Robinson Cano, Kyle Seager, Nelson Cruz and Felix Hernandez.  So now’s the time to go see the Mariners!

Before the game, we stopped at a Mariners team store that was conveniently located right in the middle of downtown Seattle.  That was a great convenience, and not something I have really noticed any other MLB team do.  At the store, I got a Ken Griffey, Jr. shirsey that had a “patch” saying “2016 Hall of Fame Induction” on it. That was a great souvenir.

Because we got to the ballpark at 4:30 to see batting practice and go on a backstage tour, the ballpark was almost empty when we arrived.  But as soon as the gates opened to the public, there was a 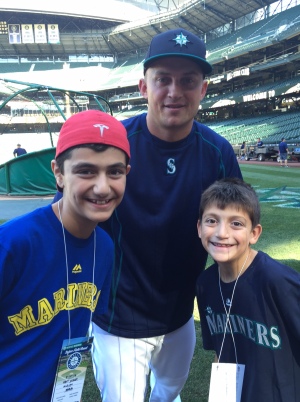 rush of fans to get inside.

The M’s previous game the night before was a 15 inning roller coaster that the Mariners eventually won.  Because of the late ending, the teams didn’t take as much BP as we hoped they would. We still got onto the field, and I got to take a picture with breakout 3B Kyle Seager.  If you don’t follow baseball closely, you may have missed how great a player he is.  He is in the same category of third basemen as guys like Nolan Arenado, Manny Machado or Anthony Rendon.  Seager has a solid bat and made a spectacular defensive play later in the game, so it was great to meet him before the game.

Also on the field, I talked with Aaron Goldsmith, a play-by-play announcer for 710 AM ESPN Seattle and Root Sports Northwest. Aaron gave me a lot of great tips about how to be a broadcaster, which is what I would like to do when I grow up.  He showed me his custom scorebook, where he puts stats and notes to use during the game.  Aaron said that his scorebook was actually based on the Bob Carpenter one, that many broadcasters use to keep score. He encouraged me to keep writing, as that’s the best way to describe games in colorful images for people who are not there with you to see it.

After Mariners finished BP, the grounds crew took down the cage, because the Tigers decided to take BP inside. That’s when we went inside to start touring the ballpark.

First we went into the interview room, where Rebecca Hale, the Marniers’ Director of Public Information, actually interviewed me for the M’s radio network about my experience writing MattsBats.com and visiting Seattle and other ballparks.  The interview aired before the game on Sunday, Aug. 21 versus the Milwaukee Brewers.  Listen to it below! 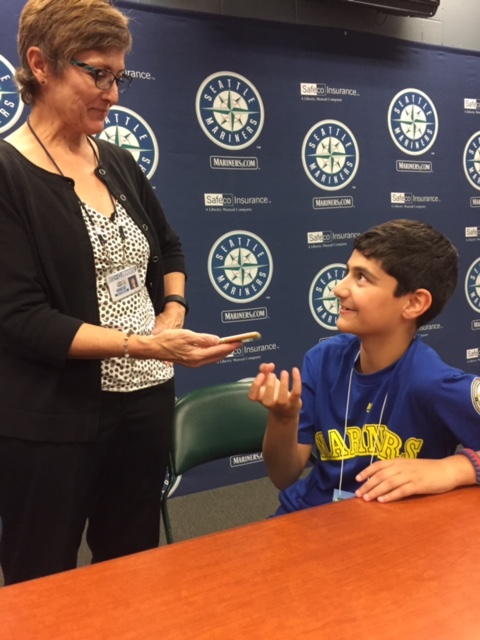 After the interview, we went up to the press box. We looked out the window of the press box over Safeco field and picked up the game notes and scoring sheets.  It was a perfect view of the field, not too high up.  We saw where some foul balls came into the press box and dented the walls.  And during the first couple of our game, we actually saw two balls fly into the press box. 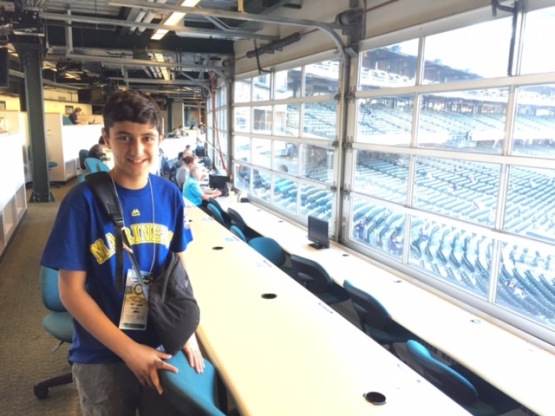 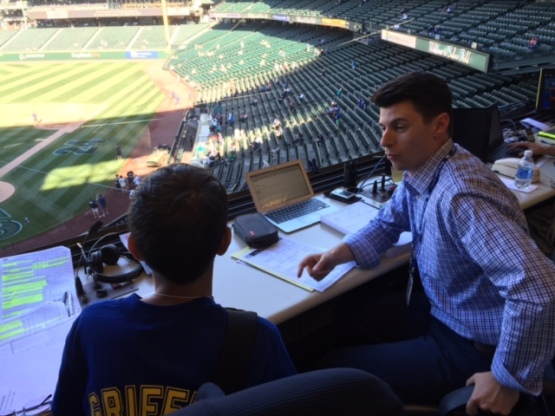 Getting baseball broadcasting lessons from Aaron Goldsmith up in the broadcast booth. 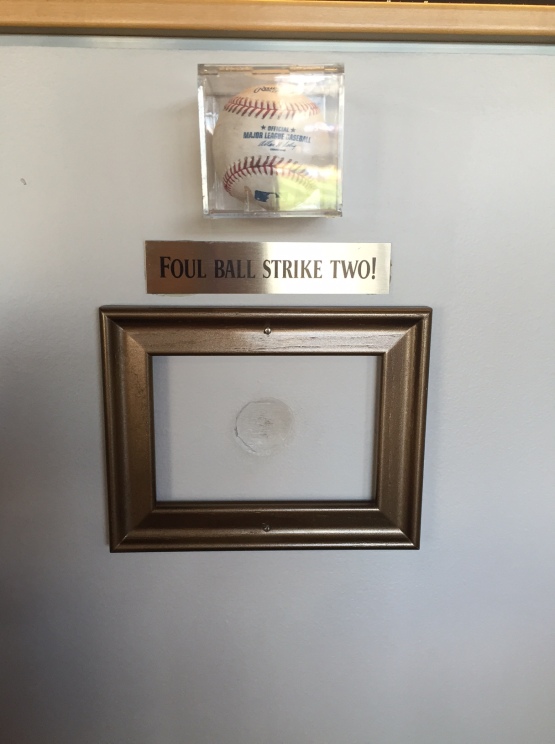 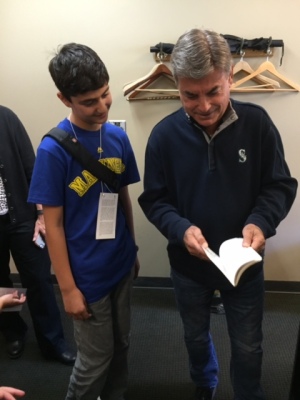 Upstairs from the press box are the broadcast booths.  We first went into the radio booth, where we met up with Aaron again, and then we saw Rick Rizzs, the play-by-play announcer for the M’s radio since the 1980s.  Rizzs was legendary Mariners broadcaster Dave Niehaus’s partner from his beginning with the franchise to when Niehaus died in 2010.  Now the press box is named after Niehaus.

Rick gave me some great tips on how to be a broadcaster and we talked about how much baseball information is available on the internet now compared to what was in the thin little media guides 20 or 30 years ago.  A broadcaster, like a player, needs to work your way through the minors in order to eventually land a gig on the MLB level. He thought it was great that I started writing when I was only 8 years old.

The voices of the broadcasters travel very far, I learned, as the Mariners’ broadcast territory extends all across the Pacific Northwest (Washington, Oregon, Idaho, Montana), as well as the two non-contiguous states, Alaska and Hawaii.  Compare that to the teams I’m more familiar with on the East Coast, where there are the Nationals, Orioles, Phillies, Mets, Yankees, and Red Sox all within 450 miles on I-95– not to mention the Pirates and Blue Jays all within a few hours’ drive too.

After visiting the radio booth, we went over to the TV booth, where we met with the TV voices of the team, Dave Sims and Dave Valle. They were very friendly and told us a lot of interesting things about their jobs.  I pointed out where Bryce Harper hit the glass at Safeco below the “Hit it Here” sign deep in the outfield. (See video here).

We talked about different press boxes around the league.  The press box at Nationals Park is really high up, as is the one in Pittsburgh, which is the highest in MLB.  I’ve been in both of those press boxes.  We talked about how hard it is to tell at that level if a fly ball is a home run or just a regular can of corn.  You have to watch the outfielders react, and really try to get to BP to see how the ball comes off the bat. 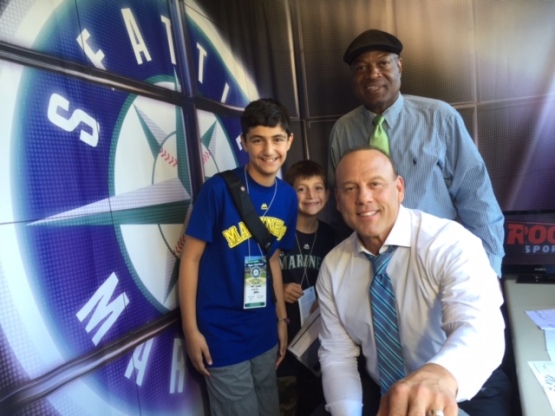 The two Daves also pointed out their bulletin board with the text of the advertisements and promotions that the announcers read during stoppages of play.  I found that very interesting.  They joked that reading the ads correctly was the most important part of their job. 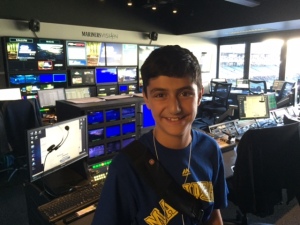 Finally, we went into the Master A/V Control room. The entire scoreboard is one HUGE video board. The team has a control room that looks like a TV studio and it controls the music, visuals, and PA systems throughout the ballpark. My five year old sister was walking around the control room, and got dangerously close to the microphone. Knowing my sister, I thought she was going to speak into it, but luckily she didn’t!  Interestingly, the room is not noisy and chaotic during a game; it’s actually very quiet because everyone is busy working and wearing headphones.

That ended our behind the scenes tour, but was just the start of our night at the ballpark.  But before we sat down, we walked once around the whole stadium. For dinner, I decided against my normal hot dog for a Seattle classic, Ivar’s Fish and Chips.

While walking around the stadium, we also stopped by the Moose Den to take a picture with the Mariner Moose. 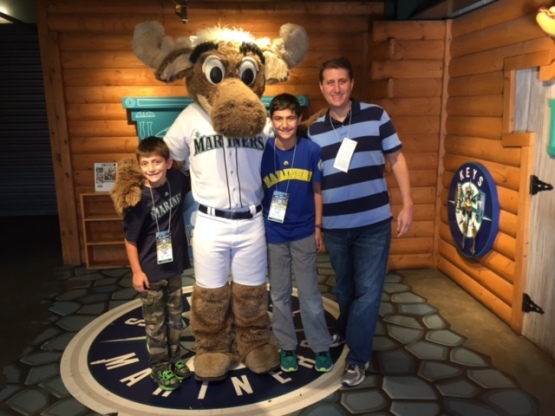 When we got back to our seats, we noticed there were, coincidentally, Nats fans sitting right behind us. We talked with them a little before the game started, and then saw them the next day at the EMP Museum below the Seattle Space Needle.

The game we saw was a good old-fashioned pitcher’s duel: former Cy Young winner for the Detroit Tigers, Justin Verlander, versus fomer Cy Young winner “King” Felix Hernandez for the Mariners. Since it was Hernandez’s start, a section in left field was made into the famous “King’s Court” for the game. All the fans in that section get a yellow t-shirt and “K” sign to wave.  Whenever Hernandez had 2 strikes on a batter, the fans in King’s Court (and really anywhere else) chanted “K! K! K! K! K!” to try to distract the hitter and get Hernandez the strikeout. It’s really neat that the team does that, but having only seen the King’s Court on TV, to behold it with my eyes was amazing. (We were even given King’s Court t-shirts by the Mariners as a gift when we arrived).  I added to my collection of Mariners merchandise by buying a cap, which of course I had to wear backwards like recent HOF inductee Ken Griffey, Jr. 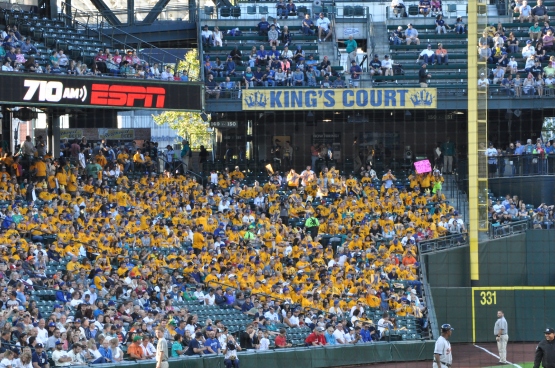 The Tigers went down in order in the top of the 1st, but in the bottom of the first inning Robinson Cano drilled a 1-2 Verlander changeup over the left field fence and beyond the reach of the left fielder Justin Upton. But in the top of the 4th, J.D. Martinez drove in Ian Kinsler with a single, tying the game at 1. Verlander and Hernandez were solid for the next couple innings, and after the 6th inning. The two starters threw about 100 pitches each in a 1-1 match up for about 6 innings.  I was hoping former Nationals closer Drew Storen, now in the M’s bullpen, would make a relief appearance, but he didn’t.  In the bottom of the 8th, Nelson Cruz hit a bomb off Justin Wilson to give the Mariners the lead back. Also in that inning, Leonys Martin gave the bullpen some insurance, singling in front of the left fielder to drive in Kyle Seager and make it 3-1 Mariners. In the bottom of the 9th, Nick Vincent had a solid inning, retiring the side having to face only 4 batters and lock down another win for the burning hot Seattle Mariners. This win boosted their win streak to 7 games.  It was great to catch the Mariners on a hot streak, and to see them “Cruz” to victory off of Nelson’s boomstick. 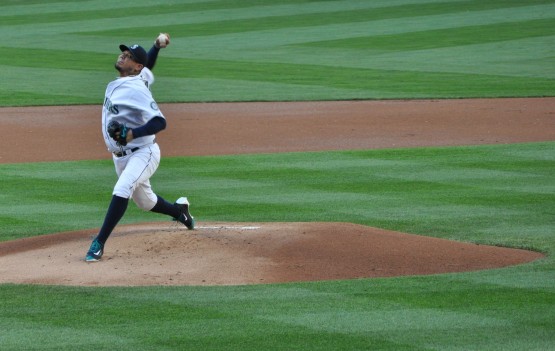 Overall, I think that Safeco Field is a very nice ballpark for baseball fans to visit.  The staff is very friendly, the food options are very diverse, the history of baseball in the Pacific Northwest is very well described, and there are many baseball-themed activities for kids (something you can’t find at most ballparks).  It’s an interesting-looking ballpark, unlike some of the plainer ballparks in the league (like DC’s).  I found a reason to become a fan of the “other Washington” ballclub, and I’m glad I did.  You can bet I will be tuning into more Mariners baseball games whenever I can!  And I look forward to the Nationals playing the Mariners next season in interleague baseball!