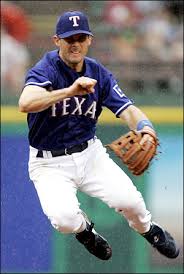 Texas Rangers trade star utility player Michael Young to Philadelphia for relievers Josh Lindblom and Lisalverto Bonilla. Young was like Bryce Harper or Mike Trout when he made his major league debut.  But that was a long time ago….1995.  17 years ago to be exact!  So Michael Young really isn’t that young anymore.

Still, this is a good trade for the Phillies. Young can hit, field and play wherever Charlie Manuel wants him. The Phillies have had a lot of trouble in their infield recently with injuries to their stars like Chase Utley, Ryan Howard and Jimmy Rollins.  Maybe Young will be a starter this year–maybe at 3rd base (or maybe the Phils will stick with Kevin Frandsen).

This is looks like a huge loss for Texas. This offseason they lost Mike Napoli and it looks like Josh Hamilton might sign with another team.  But the Rangers GM made the trade because he saw something he liked.  For example, Bonilla is supposed to be a rising star.

The Phillies keep trading away relievers and acquiring very good, but older players in return (except for Ben Revere).  Despite his age, the future of UTIL Michael Young is with Philly.