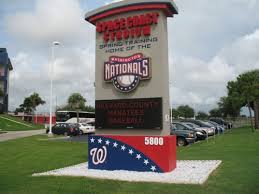 The pictures say it all… SPRING TRAINING STARTS TODAY!! Baseball is back in action today as the Nationals’ pitchers and catchers report to Space Coast Stadium in Viera, FL. Injured players report today, too, not only the pitchers and catchers.
The rest of the squad reports on February 15, but several position players are already in camp.
AND THE OFF SEASON IS OFFICIALLY OVER!!
Baseball is back, and there will be major league ball played almost every day until November.