Book Review: The Years The Giants Won The Series 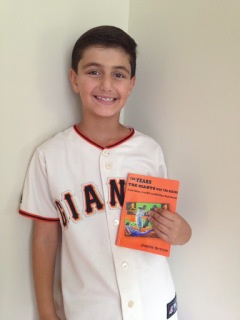 Many Matt’s Bats readers know that I visited San Francisco in mid-June and was lucky to see the Giants take on the Padres at AT&T Park.  Now that the Giants are in town to play a series against the Nationals, I thought it would be a good time to tell you more about a good baseball book that I recently read about a family that roots for the Giants.

Shortly after I got back from my San Francisco trip, I was given the chance to read and review a book written by Joseph Sutton called “The Years The Giants Won The Series: A Fan’s Journal of the 2012 and 2010 World Series Seasons.” It is written from the journals Joe keeps every day, and he discusses the Giants 2010 and 2012 seasons and how it compares to what he wrote in his journal from the days when he was coaching his son, Ray, and his Little League Team.

The book is not only about the Giants winning two World Series titles in three years, it’s also about Joe’s baseball relationship with his son from the time he was a young boy to the age of 21.  The main message is that many of the characteristics that a baseball team needs to succeed– talent, fortitude, determination, perseverance, and patience– are also necessary for parents to teach to their children.

Joe Sutton became a Giants fan in about 1975 when he moved to San Francisco.  He went to see a game against the Dodgers.  At the beginning of the game he was rooting for the Dodgers because he grew up in L.A. and had been a Dodger fan all his life.  In the middle of the game, though, he started to transform into a Giants fan.  He remembered, “If I’m going to live in San Francisco for the rest of my life, I might as well root, root, root for the home team.”  He’s been rooting for the Giants ever since. 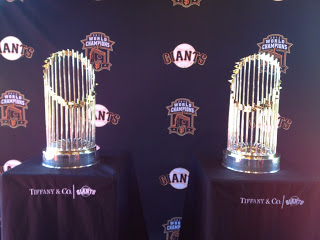 It was not always easy being a Giants fan.  After leaving New York in 1958 for San Francisco, the Giants had never won a World Series.  They made it to the World Series in 1962 (losing to the Yankees) and 1989 (losing to the cross-town A’s in the series that was interrupted by the earthquake).  But everything changed in 2010, and again in 2012– 2 World Series trophies in 2 years, after 53 years without one.   The 2010 Giants were one of the most exciting teams in baseball, with lots of characters like Tim “the Freak” Lincecum, Brian “the Weez” or “the Beard” Wilson, and Pablo “the Panda” Sandoval.

Joe’s book shows that “a team is more important than individual egos, agendas or statistics.”  He thinks that is why the Giants had their magical season in 2010.  Another important element to the Giants’ success, he writes, was their “never-say-die” attitude.  Fans should act the same way.  The main lesson that he wants fans to understand is that “you should always root for your team and players during strengths and struggles, and you’ll be rewarded.” This positive attitude is very similar to what I wrote about in my Definition of Mattitude post last week, after the Nationals were on a disappointing skid. 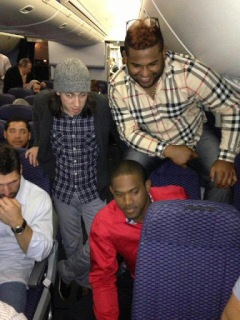 The book starts with the 2012 season and Joe is MAD. Two-time Cy Young winner Tim Lincecum wasn’t pitching very well.  In mid-August, after an amazing first half capped off by an excellent All Star Game with 5 RBIs and being named the MVP, outfielder Melky Cabrera was suspended for the remainder of the season.  Things weren’t looking good for the Giants.  (Meanwhile, the Nationals were on a tear all season.  They had the best record in baseball and were looking like they could be Series Champions. They played strong against the Giants that season, winning 5 out of the 6 games they played that year).  Things happen in baseball.  The Giants won the NL West, and the Nats won the NL East.  The Cardinals squeaked in by the Wild Card, and upset the Nats in Game 5 of the NLDS with a crushing loss with 2 outs and 2 strikes in the 9th, down by 4.  The Giants team was already on the plane to come to DC to play the Nats in the NLCS, but turned around and headed home to play the Cardinals after that game.  The Giants took that series, and eventually swept the Tigers to be World Series champs in 2012.  Joe was extremely happy.  From what the Giants did in 2012 (and also in 2010), he saw the “never-say-die” attitude that was the main ingredient for his son’s baseball success.

While Joe was celebrating on the West Coast, Nats fans on the East Coast were upset with the Nationals’ disappointing loss.  Joe sees a good teaching lesson from that: “Baseball can teach children that there are good days and bad, glorious times and bumps in the road, and that sometimes things don’t go the way you want.  Baseball, to me, is such a great symbol of life itself.”

There are more lessons like that in his book: “The most important lesson I wanted to pass on was how the game can bring fathers and sons closer together, how it can bond fathers and sons for a lifetime.  Although I wasn’t always patient with my son when I coached him, I learned to be patient with him and to trust his judgment.  I hope all parents can learn those two lessons:  being patient with their children and to trust their judgment.”
I was able to ask Joe a few questions:
Matt’s Bats: What do you think about the Giants in 2013?  What’s your World Series prediction for this year?
Joe Sutton: I feel bad that the Giants aren’t doing well this year.  They’re in the cellar of the West Division, 12 games behind the first place Dodgers.  They were the world champions last year and now they’re one of the worst teams in the major leagues.  Sad.  They’ve had a lot of injuries this year, plus their hitting and pitching has been way below par.  Since there are 51 games left in the season, I will quote Yogi Berra:  “It ain’t over till it’s over.”  If the Giants don’t make it into the playoffs, I, like any loyal fan, would then say, “Wait’ll next year.”
As for a World Series prediction:  It depends on which team is the hottest team when the playoffs begin.  I’ll go out on the limb and predict it will be either the Dodgers or Cardinals in the National League, and either the Tigers or Red Sox in the American League.  Because the American League won the All-Star game this year, that means their representative will have home field advantage.  So the World Series champions will be either Boston or Detroit.  But who am I to predict the future?
MB: Did the Giants World Series wins help bring you closer to your son?

JS: It brought us closer than ever.  We watched many games on TV and at the ballpark.  The Giants, over the years, have played a huge part in bonding the two of us.

MB: How do you think sports can bring parents closer to their kids?

JS: Coaching my son brought both thrills and frustration. Thrills when he made winning hits, great plays in the field or when he stole a base.  Frustration when he got down on himself or was mired in a bad slump.  That’s when I learned that I had to be more patient with him.  The memory of going through the hard times and good times together will always be with us.  Even though my son is now 32, we still reminisce about those days.

MB: What are the most important skills for young baseball players like me to learn?
JS: Practice, practice, practice your fielding and hitting; this will give you confidence in your ability as a baseball player.  Always hustle, use your brain, and never get down on yourself.
MB:  When did you start writing the book?  How long did it take you?
JS: I didn’t know it at the time, but I actually started writing the book when my son was born 32 years ago.  I went back to all the journals I had written since his birth and plucked out those parts about our baseball relationship.  The other half of the book about the Giants, I also extracted what I wrote in my journals of their two World Series years.
MB: What are the most important skills in baseball?  How do you teach them?
JS: First of all, you have to love the game of baseball.  If you love the game, it won’t be a chore to keep working on your hitting and fielding skills, even if it isn’t baseball season.  Be curious; ask questions of those who are playing or coaching the game, not only on major league level, but players and coaches in high school and college.
MB: A lot of people think that football has replaced baseball as the national pastime, but it still seems like there are a lot more books, movies and TV shows about baseball.  Why do you think that is?
JS: I believe baseball is and always will be the national pastime.  Baseball is more like life than all the other sports combined.  Why?  Because it’s played every day by every team for more than half the year.  Every day!  It’s like going to work or school.  Some days are good and some not so good.  But there’s always tomorrow to look forward to with the hope of your team improving its chances.
* * * * *

Here are 2 pictures of me and my dad at AT&T Park this summer.  Baseball has brought me and him closer together.  We go to lots of games.  We talk about baseball, and he always comes to my little league games.  We play catch or whiffle ball all the time.  He helps me write and edit my blog, and we spend hours of time together talking about it and working on it.  Especially on this post, which we worked on for a very long time: 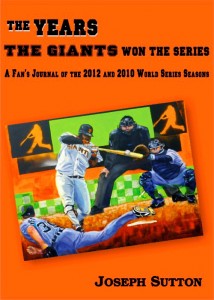 Joe Sutton’s The Years the Giants Won the World Series is great. People can buy it at any bookstore in the United States (if it’s not in the store, the bookstore can order it).  They can also buy it on Amazon.com, or from his website, JoeSutt.com.  If anyone wants an autographed copy, he or she can go to www.JoeSutt.com.  The price, depending on the website you go to, ranges from $10 – $15.

Joseph Sutton was born in Brooklyn and raised in Hollywood.  He played football at the University of Oregon and graduated with degrees in philosophy and history.  He has been writing since 1969 and is the author of ten books, one of which has been endorsed by a Pulitzer Prize winner, and two books that have been recommended by National Book Award winners.  His essays and short stories have appeared in numerous national magazines.  Sutton lives in San Francisco with his wife Joan.
THE YEARSTHE GIANTS WON THE SERIES
A Fan’s Journal of the 2012 and 2010 World Series Seasons
By Joseph Sutton
ISBN:  978-0-9825598-9-5
Price:  $15.00
Publication Date:  May 1, 2013
Publisher:  Mad Dog Publishing Company

If you have books or other products relating to baseball or kids that I can review, send an email to web[@]mattsbats.com