Sorry I haven’t been writing on my blog last week. I have a lot going on with with school and my lung cancer fundraiser. But there is a lot to update you on.  So here’s a little heads-up on what’s happened in the past week and more.  I am saving the best piece of news for last, so be sure to read all the way through.

Last month, Matt’s Bats debuted as an MLB Pro Blog and came in #45 in popularity.  Making the Top 50 is pretty good in the first month.  In September, I moved up 13 spots to #32!  I happened to beat the blog that Orioles pitcher Jason Hammel writes, which came in at #39.

The DC Chapter of the Internet Baseball Writer’s Association published its 2013 Player Achievement Awards.  I voted in the survey.  You can see my First Place votes and how that compared to the winning First Place votes.  To see all the winners, CLICK HERE.

Baseball Season over for the Tigers 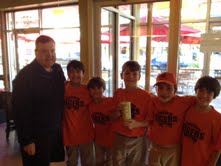 My little league team, the Tigers, finished the season strong with a win over the Pirates, 9-4. Our record was 4-2-1.  I played right field and catcher in our last game of the fall season, and I almost threw out who was trying to steal third from the catcher spot.

As you probably know, I’m raising money for lung cancer in memory of my grandfather. I am so grateful that so many people have supported me by donating money to this cause. You can donate here or sign up to participate in the Breathe Deep DC 5K walk on the National Mall on Sunday, November 3.

Also, please read my post about why I am raising money for lung cancer.

My goal was to raise $5,000.  I thought that was a big goal and a massive challenge.  I loved my grandfather so much that I want this terrible disease to be cured. I thought that $5,000 was so much money, but that is what is needed to defeat something so terrible.  Even though lung cancer is the #1 cancer killer in the U.S., it does not get a lot of money for research.

So how am I doing?  Well, let’s check the thermometer: 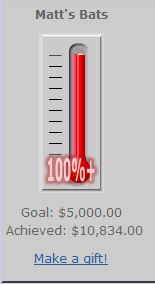 My goal was to raise $5K for the 5K.  I actually hit that on Friday night, October 18 (which was a special day to reach this goal).  And then….

That is a ridiculous amount of money.  Thank you so much to everyone who has given.  Even though I never thought I would raise $5,000, and I actually passed my goal by $5,834, you can still donate sign up to walk with us HERE.

That’s all for today, Monday, October 21.  No MLB baseball until the start of the World Series on Wednesday, when the Boston Red Sox take on the St. Louis Cardinals.  Also, check back later this week where I will be sharing some details for a really cool baseball-related charity event.