As you all know, I have interviewed many kids who are doing great things in baseball, like MLB Official Youth Reporter Meggie Zahneis and the first youth MLBlogs pro blogger Matt Nadel. During the offseason, I met with another kid blogger, Haley Smilow, right after she was featured in the New York Times. Haley has joined “Matt’s Bats” and “Baseball With Matt” as the third official youth pro blogger for MLBlogs. He has also written for SI Kids. Her goal is to make it to all 30 MLB ballparks with her family, and she has already been to a lot of them and interviewed a lot of players. Here’s my interview with Haley, and, as always, if you know any kids—or adults!—doing interesting things in baseball who would be willing to give an interview, contact me!
Matt’s Bats – How did you get featured in The New York Times?

Haley Smilow –I actually started writing in a different magazine and more and more people found me. My dad spoke with the editor of The Riverdale Press a local newspaper in the Bronx and they agreed to publish my interview with Justin Turner formerly of the Mets and they also want to do a feature about me. The New York Times picked up on that article and they tracked me down. The reporter from the Times spent two days with my family and then they put me in the Times.

MB – How did you get to be an SI Kids reporter?

HS – Every year SI Kids selects 8 kids to be reporters for SIKids.com and I applied. There were many stages after the application, until finally they notified me that I had been selected as a kids reporter for 2013 /2014. It’s not easy because there are only eight kids who get the chance and luckily they picked me.

MB – Is it cool? What do you do as a kid reporter?

HS – As a kid reporter, I write a blog about five paragraphs each month about different sports. Sometimes I get to go to events because of SI Kids. I went to the 2013 All Star Game for SI Kids and interviewed a bunch of players. That wouldn’t have been possible without that connection.

MB – I’ve always wanted to go to the All Star Game. I also see that you have done lots of player interviews at the ballparks you visit. How do you get first class access to ballparks?

HS – They give me a credential and then me and my dad ask where we can go because we don’t want to break any of their boundaries. The player takes us around wherever he wants to sit and that’s pretty much where we do it. Most times it’s in the dugout because that’s the easiest place for them since I do it after or before batting practice. How do I get into the press box? Normally, with my credential it says “Allow in the Press Box.” Except the press box is not a fun place for fans like us because you just have to sit there and practically do nothing. You can’t root for anyone! I don’t really like the press box so we usually find other seats.

MB – How did you get inspired to write your blog? When did you start?

HS – We got an email from MLB Advanced Media and they asked me if I wanted to write a blog. And I said “Sure!”

MB – Who have you interviewed?

HS – I have interviewed about 22 baseball players from different teams, during spring training and during the regular season. Bigger interviews are Andrew McCutchen and Ricky Weeks. Some of my favorites are AJ Pierzynski, Kris Medlen,  Garret Jones, Jose Altuve, and David Price.

MB – Who do you want to interview?

HS – Anybody who is willing. I’d like to interview Derek Jeter. My dad has said Mariano Rivera. But anyone who would be willing take the time and sit down with me. Just getting to do an interview is something special because most kids our age don’t get this shot.

HS – In 2009 or 2010. My uncle has season tickets to the Yankees, but he doesn’t go sometimes and he gives us the tickets. We went more and more and we fell in love with the game and the Yankees. In 2010 my brother was watching a Royals game on TV and he decided he wanted to go there in the summer. My parents said no. But even still, the next summer we were in Kansas City watching the Yankees versus the Royals. My love of baseball just followed. I like getting to talk to the players. I even like the “sounds and smell” of baseball, which is when I step on that field and I think “this is so nice.” But I like the smell of fried food more than the smell of the grass.

MB – Mine started around the same time except I went to a game with my dad and some guy who we did not know offered us his tickets in the front row. We went from the last row of the upper deck to the first row. And I got a ball. It was one of the best days of my life.

HS – In Minnesota, my dad yelled to Derek Jeter “have a great game!” Derek Jeter then gave his batting practice bat to my little brother. When you’re a true fan like us, you know how to deal with some of the players instead of just yelling for an autograph. We have learned that although it’s a game, it’s their job. We still try to get balls and try to collect one from every stadium. 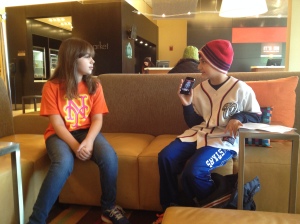 What Haley said about being a professional around the game of baseball is really true. It is not just people playing for fun, people make their jobs around baseball. The players like to interact with their fans, but they still need to take BP, stretch, and get ready for the game. Ian Desmond is one of the few players I know of who always makes time for autographs for fans before games, which is why he is so loved in Washington. For me, it really is difficult to be a fan and a blogger at the same time. I am not a professional journalist who can’t root for the Nats, but I am also not like the average 4th grader who can go to games and just ask for autographs the whole time. I try to be a mix of both. Here is an example. At Nats Fest this year, we bought autograph vouchers and I waited on line to get autographs, but when I went up to the table, one of the players said “Hi Matt” and was a little surprised that I was on line and wanted an autograph. Since I am just a kid and not really a professional journalist, I was able to interview Justin Verlander and then instantly ask for his autograph because I am such a fan and he is a really good player. But could you imagine Ken Rosenthal doing that? I love writing Matt’s Bats and getting to meet the players, and I think I am still going to ask for pictures and autographs as long as I can until it becomes awkward.