Home › Uncategorized › Raul, So Cool (The Nats Not So Much)

Raul, So Cool (The Nats Not So Much) 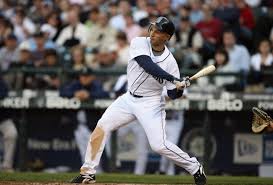 8 months ago, in the ALDS, Raul Ibanez of the New York Yankees hit a game tying homer in the 9th against the Orioles, and then in the 11th, Raul hit the game winning home run.

But in the offseason, Raul was a free agent.  The Mariners liked his clutch hitting at the perfect time, and so they decided to send him to Safeco Field. The Seattle Mariners had lots of good little pickups during the winter: they got Kendrys Morales from the Angels, Michael Morse from the Nats, and then finally, Raul Ibanez from the Yankees. Those three contributed a lot in Wednesday’s 12-2 rout of the Yankees.

Ibanez hit 2 home runs in yesterday’s game, including a grand salami to about the same place he hit his game-tying bomb in the 9th. He pulled another homer to left field.

Unfortunately, none of the Mariners’ luck spread to the Nats on their 3rd game against the Dodgers.  The Nats lost the 3-game series to the Dodgers after losing last night 3-1.

Ross Detwiler left the game in the 4th inning due to tightness in his lower back. Davey Johnson said he probably would not miss the next start, but I started thinking who the call-up would be if he did have to leave the rotation.  After looking at the Nationals’ 40-man roster, I believe Yunesky Maya or Matt Purke will take Detwiler’s spot in the rotation, or have the Nats just go with their top 4 and skip Det once.

Also, Wilson Ramos left the game in the top of the 4th due to his left hamstring. Kurt Suzuki took his place behind the plate, after pinch running for Ramos. I guess jersey numbers 3 AND 40 are unlucky for Wilson. The Nats will call up The Onion (Jhonatan Solano) while Ramos rehabs.

Adam LaRoche did the weirdest thing ever. He hit a foul ball to left and another to right, and when he stepped up to the plate a 5th time, he homered to center. That was the Nats’ only run of the game.

The Nats were 0-for-9 with runners in scoring position. If they were 3-for-9 last night, they would’ve won. The big difference between last season and this season, is that last year they were able to pull out wins on these small scoring, close games.  This year they have been on the losing end a lot more often.  All games count the same, so they’ve got to win more of these close ones.