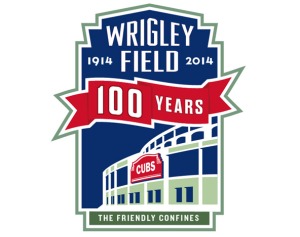 With pitchers and catchers already reported to Spring Training camp and Opening Day about 6 weeks away, the 2014 baseball season is about to begin.  This season is going to be a very special one for fans of the Chicago Cubs.  Wrigley Field is turning 100 in 2014.  Even though the Cubs haven’t ever won a World Series at Wrigley (the last win was in 1908– 106 years ago), there is definitely going to be some big celebrations in Wrigleyville this year for Chicago’s beloved “Friendly Confines.”

As you also may remember, Fenway Park in Boston, celebrated its 100th birthday a couple of years ago.  At 102 years old, Fenway is the oldest standing ballpark in the majors. While Red Sox fans, coming off their 3rd World Series win in 10 years, are probably feeling better about their team than fans of the Cubbies, we can’t forget that Sox fans went 86 years between World Series wins.  Fenway Park has gone through hard times, too. The ballpark survived 3 fires, 2 in the 20th century and one in 2012.

Most of the ballparks in the majors are less than 20 years old.  After Wrigley and Fenway, the next oldest is Dodger Stadium, is only about half as old as these two.  Can you imagine a world without TV and computers?  Obviously, those weren’t invented until way, way after Wrigley Field was built.  Can you imagine eating a hamburger without a bun?  Well, you would have had to if you ordered a hamburger at one of Wrigley Field’s first games because hamburger buns weren’t invented in 1914.  In fact, you couldn’t even go to a supermarket in 1914 because those weren’t created until after Wrigley Field was built.

One of the things that’s hardest to believe is that the Cubs only played day games at Wrigley Field until 1988, because there weren’t any lights at the ballpark. The first night game at Wrigley, however, was the All-American Girls Professional League All-Star Game in the forties. Today, Wrigley Field and Fenway Park still have manual scoreboards. The original manual scoreboard at Wrigley has been there since 1937.  The scoreboard is so deep in center field that no batter has ever hit it.

You may be asking yourself why I’m writing about Wrigley Field and Fenway Park.  Well, it’s because I just red two great books about these old ballparks:  F is for Fenway and W is for Wrigley.   These are great books for kids my age who are interested in the history of baseball.  You can find them HERE and HERE.  I really recommend these books.  In this post I will tell you more about the history of the Fenway Park (the “Baseball Cathedral”) and Wrigley Park (the “Friendly Confines”). 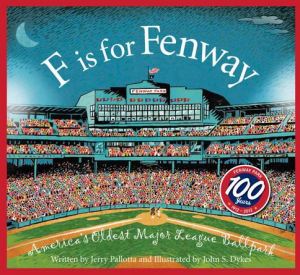 Fenway Park:  James E. McLaughlin, a builder from Boston, Massachusetts, got a plot of land in between Ipswich and Lansdowne streets in downtown Boston. Construction of the ballpark began in 1911 and finished in 1912.  102 years later, Fenway Park is one of the most popular spaces in Boston.

The Yawkey family, who owned the Red Sox, named their new ballpark after the section of Boston in which it is built.

The Red Sox won the World Series in the first year they played at Fenway Park.  Strangely, it wasn’t the baseball team that drew the largest crowd to Fenway Park .  The largest crowds came to Fenway in 1914 to watch three elephants parade though the streets on their way to the Franklin Park Zoo!  Almost 37,500 fans watched the Sox win the World Series in 2013, but 50,000 people watched the elephants in 1914!

One of the most unique parts of Fenway Park is the Green Monster, the highest wall in a MLB ballpark.  It is 37 feet tall and 240 feet long and looms over left field.  The Green Monster holds the only ladder on a field of play and a manual scoreboard.

Also, the Yawkey family hid their initials in Morse Code on the manual scoreboard.

Fans at Fenway Park are also very charitable. The official charity of the Red Sox, The Jimmy Fund, collects more than $1 million each week through fundraisers and collections in the red boxes all around the ballpark.  The Jimmy Fund started when a radio station surprised a young hospital patient with signed balls, tickets, and caps from his favorite team, the Boston Braves.

Wrigley Park:  Zachary Taylor Davis was an architect from Chicago who got a piece of land and built a stadium at  the intersection 0f Clark and Addison streets.  Davis also built Comiskey Park, former home to the cross-town rival White Sox.

The stadium Davis built, called Weeghman Park, became the home to the Chicago Whales. The Whales were part of the Federal League, which existed in 1914 and 1915.  The Whales and Cubs merged in 1916.  When William Wrigley took over ownership in 1921, he changed the name of field after his company. Welcome to the beginning of the sports stadium marketing era! Nice job.

The Chicago football Tigers and Bears also called Wrigley their home for a while.  There was a soccer team in the 1970s and 1980s called the Sting that also played at Wrigley Field.

The layout of the Wrigley Park field is a little unusual for modern ballparks.  First, the bullpens are in foul territory, not behind the outfield walls, as in most ballparks.  (A few other ballparks still have this, like AT&T Park and Tropicana Field).

Another unique thing about the park is that there is ivy growing on the outfield wall.  Bill Veeck, the team’s general manager in 1937, got the ivy idea because he saw Perry Stadium in Indianapolis.  Wrigley is the only professional ballpark with ivy covered walls. If a ball hit into the ivy gets lost, it is an automatic ground rule double.

The weather in the Windy City is an important factor at Wrigley Field.  Depending on the direction of the winds coming from Lake Michigan, the park can give up a lot of home runs or keep long fly balls in play.  That’s why it’s important to note the flags around the top rim of the park to see whether the wind is blowing in or out.

Speaking of flags, when the home team wins, a white flag with a blue “W” in flown.  If the team loses, a blue flag with a white “L” is displayed.  That way fans can keep up with how the team is doing from wherever they are in the city.

Wrigley Park also has some fun traditions, like how Cubs fans throw back home run balls hit by the opposing team.

The Cubs haven’t been in a World Series since 1945 when tavern owner Billy Sianis got ejected from the stadium because he brought a goat inside. It is believed he cursed the team for being thrown out of the game.  It is now known as the “Curse of the Billy Goat” that haunts the Cubs.  Here’s the good news for Cubs fans: the team’s farm system is one of the best in the big leagues and they have one of the best general managers in the game.  My prediction is the Cubs are going to win a lot more championships at Wrigley in the second 100 years than the first 100 years, and probably could be contenders for a Series very, very soon.

Again, I really liked the books F is for Fenway and W is for Wrigley.   The author of W is for Wrigley also wrote a book called H is for Home Run, which is also very good.  Even though they are “alphabet books,” these aren’t books for little kids.  They’re probably best for kids in grades 3-9, but even younger kids and older kids (and adults) would like them too.  I bet you, no matter how old you are, you will learn some new things by reading any of them.