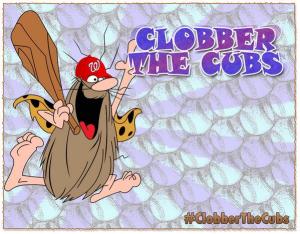 The Nats played extremely well against the Brewers. I got my prediction right for the first time since the San Diego series, and there was timely hitting in the first two games. I thought that the Nats would clobber the Crew in game 3, but Marco Estrada held the Nats’ bats to two hits and the Milwaukee bullpen paid the Nats back by holding them hitless.

The Nats now take the drive down to the Windy City to face the Cubs. In recent years, the Cubs have put up some competition against the Nats, but the Nats usually win. I think that will be the same this series.

The most interesting game for me will be the Saturday day game.  I AM GOING TO THAT GAME, and I expect them to win.  Saturday is a double-header, after the game that was originally scheduled for Sunday will be played on Saturday night instead.  The Nats are facing off in game 1 of the day-night doubleheader on Saturday against Dallas Beeler. Who?, you may ask.  Beeler is being called up from Triple-A Iowa for the 26-man roster for the doubleheader, when you can get one extra player.  The Nats are calling up Blake Treinen.

I think the Nats will win 3 out of 4. They will probably beat Travis Wood tonight, and lose to Jason Hammel on Friday.  I’m predicting that they beat Beeler in the first game of the doubleheader, and beat Samardjia again at night due to the lack of run support he gets.  Best news of all for Nats fans is that Wilson Ramos comes off the DL in time for Thursday’s game.  I hope that the Nats win, though the competition may be hard during the Nationals’ only visit to historic Wrigley Field on its 100th anniversary.

You are NOT going to want to miss some of the pictures and things I will be tweeting from my Wrigley Field experience.  I will be writing another post about my Chicago trip, which I am so excited for.