Home › Uncategorized › Up in the Booth: How Does A Baseball Radio Broadcast Happen?

Up in the Booth: How Does A Baseball Radio Broadcast Happen?

Imagine you are sitting in your living room in, say, Arlington, VA.  Your hometown Nationals are on the road, but you want to listen to Dave Jageler and Charlie Slowes call the game on the radio.  As you turn on the radio, maybe you wonder, “How is it possible to hear Charlie and Dave, and all the sounds of the ballpark, when they are so far away and I’m just sitting at home?”

I recently was able to find out all about how the game gets broadcasted and delivered to your radio, and all the hard work that goes into calling a game. I recently traveled to Pittsburgh and was lucky enough to peek into the radio broadcast booth at PNC Park before the Nationals-Pirates game.  I was able to ask a few questions to Dave Jageler and Jack Hicks, who everyone knows as “The Jack of all Things.”  Charlie Slowes was there too, but was mainly on the air doing the live pre-game show.

If you ever wanted to know about how a baseball radio broadcast happens, I think you will find this post very interesting. 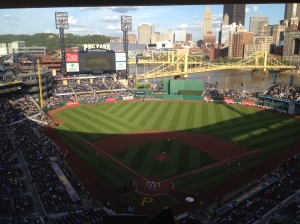 What does it look like in the radio booth?

The radio booth is actually a pretty small room but with a huge open window that looks at the field from behind home plate.  Dave and Charlie sit at a table with their scorebooks and other papers.  Dave has an iPad and Charlie has a laptop.  Dave was sitting on the left and Charlies was sitting on the right.  There was a small TV in the middle that shows the TV broadcast.  The Jack of All Things, Jack Hicks, sat on an elevated table behind Charlie and Dave with some sound equipment.

They don’t speak into a microphone like you sometimes see in movies. Instead, Charlie and Dave both wear headsets with a built-in mic.

What kind of work do they have to do prepare for a game?

They usually come to the ballpark 3-4 hours early. One of them will usually interview Matt Williams a couple of hours before the game for the Manager’s Report. They record it and then play it on the air before the game.

Then they will go upstairs to the booth and fill out the scorecard. There are also game note hand out sheets in the press box to pick up.  Even though Dave and Charlie use the Bob Carpenter score book, in the press box they have a scorecard printed up with the lineups already filled out.

The also watch BP from the field before the game sometimes.

How do they get all the sounds of the stadium?

There are microphones on the field. One is behind the home on-deck circle and one is behind the visitor on-deck circle.  You can hear the players talking or dropping their bat sometimes if you listen closely.  There is also a microphone on the wall behind home plate so that you can hear the sound of the ball hitting the bat.  There is also a microphone outside the press box to get the sounds of the fans in the stadium.

It is Jack’s job to take all the sounds and put them together.  He let me wear a headset so I could listen to just the on-deck circle sounds, but in the broadcast he mixes all the sounds together at different volumes so it feels like you are at the ballpark.

(I didn’t ask if it was a real bell or a sound effect when Charlie and Dave spell a player’s name).

How do they time the commercial breaks so that they never miss a pitch?

The MLB rule is that the breaks between innings are 1 minute and 50 seconds, and the umpires actually have stopwatches that they are supposed to use.  (On nationally televised games, the inning breaks are longer).  However, they usually don’t start the stopwatch the second the last out is recorded, and usually a pitcher works a little slow to warm up.  The commercial break on the radio usually takes 2 minutes and 5 seconds, so there is usually more than enough time for a commercial and a little bit of talking before calling the next pitch of the inning.  (The TV commercials are actually a little shorter, so they always get back in time).  However, some pitchers who work fast, like Doug Fister, may throw his pitch before the radio broadcast gets back.  It is rare, but sometimes the radio announcers miss a pitch, or have to get back real quick and say “first pitch was a strike.”  “If you miss the call, you just hope that it wasn’t a home run,” Jageler said.  This rarely ever happens, but I can recall a time on May 17 when Dave and Charlie went back on the air just as Gio Gonzalez was starting to deliver the ball to the Mets. I know that they were a second late to getting back on the air because we were at the game and listening to it on the radio at the same time!

How do they always know what pitch was thrown?

Do you think Dave and Charlie can really see what kind of pitch was thrown from all the way up in the broadcast booth?  Nationals Park has the highest broadcast booth in all of major league baseball, and the stadium I visited them in, PNC Park, is #2.  There’s no way they can tell the pitches from that high.  But they they do do a lot of research before the game on each pitcher so that they know what kind of pitch they throw.  They know that Stephen Strasburg can throw a fastball in the low/mid-90s, and his change-up is in the high 80s.  So just by looking at the speed on the radar gun shown on the scoreboard, they pretty much can tell what was thrown.

Even if they can’t tell for some reason, both Charlie and Dave use MLB At Bat Gameday, which has a pitch tracker that shows the speed, the type of pitch (based on the break) and where it was in the strike zone.  There is a little bit of a delay in receiving the information from MLB, but if it is an important or controversial pitch then having that information is important for explaining it to people. As Dave told me last year, even if he totally guessed about what pitch was thrown, nobody would know because they are listening on the radio and can’t see the pitch either.

How do they know so many interesting facts about other games, historical milestones and players on the other team?

Using At Bat and the other information they keep in notebooks, they will fill out some stats about the players in the score book before the game starts.  For example, they will note if the batter has a hitting streak or what damage they have done in the past game or against that specified pitcher.  Then, when he comes up to bat, they have something interesting to say.

During the game, they look at MLB At Bat app or Gameday so they have the stats and the out of town scores. That means you have a lot of the same information they have so if you want to pretend you are calling a game, you can do it yourself.

MLB also creates papers with all different kinds of interesting stats like how each player bats against different pitchers and things like that. They both have computers where they check their Twitter and the internet too.

How does the broadcast get to all the listeners?  Is there a delay?

You hear the call almost at the exact same time that the action is happening live.  There is only a very small delay, and the delay is shorter than the TV broadcast delay. The Jack of All Things is in charge of sending the broadcast back to the WJFK studio in Washington using something called an ISDN line.  It is a machine that gets plugged into the wall of the broadcast booth and the sounds get sent directly to WJFK from there.  It goes as fast as a phone call from the broadcast booth to the radio tower, and you really don’t have a delay when you’re talking on the phone to someone even if they are all the way on the other side of the country. There is a new type of machine that is very small called an Access that they use as a backup but maybe one day it will be how they deliver the sound to the radio station instead of the ISDN.

From the station it gets bounced to radio towers of different stations. The Nats games are broadcast on lots of radio stations in DC (WJFK, WFED), Virginia (WKAV, WFTR, WBRG, WMVA, WXGI, WZEZ), Maryland (WCMD, WWFD, WJDY, WKHI), North Carolina (WWNB), and West Virginia (WRNR). They all get the same broadcast at just about the same time and you hear it almost exactly as soon as they say it.  The broadcast also gets sent to MLB and bounced to the satellite for national broadcasts.  So if you listen on your iPad or computer to the national broadcast, then it gets delayed a little bit.

The next time you turn on the radio to listen to a game in your car, or while you are at the beach, you now know a lot more about how the broadcast gets to you.  Please make sure you read this Matt’s Bats Chat with Dave Jageler to get to know more about him personally.

Just met the Voice of the Nats in 2033. @MattsBats Hope you enjoyed BP on the field. Go Nats!!!