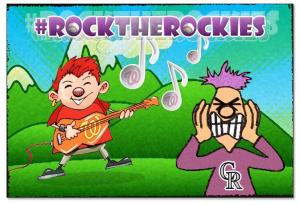 The Nats road trip was not bad! The Nats finished 4-3 in that 7 game stint in the midwestern towns of Milwaukee and Chicago. The Nats’ bats took off in the first two in Milwaukee, with Adam LaRoche, Anthony Rendon, and Ryan Zimmerman producing some timely home runs to eventually win the games. The Brewers jumped on Stephen Strasburg in game 3, and then the hitters just couldn’t touch Chicago pitching in the first two games against the Cubs.

Then, I was lucky enough to go on the field for batting practice before the first game of Saturday’s double header in Chicago (I will explain all of that in a future post).  The Nats salvaged the road trip with a doubleheader sweep on Saturday, and for the first time in Nats history, there was no game on Sunday during the regular season. Now the Nats fly back to our Nation’s Capital, and they play a team who has had success against the Nats but is on a losing streak- the Colorado Rockies.

The Rockies also just came back from Milwaukee, and were haunted by the Brewers’ miracle men who just get the right hits at the right time.  The Rockies aren’t playing very well right now, so this could be a golden opportunity to gain ground on the Braves, who are playing the Mets. However, the Braves are 393-325 in their history against the Metropolitans, and if the Rockies’ squad turns it up against the Nats, the Braves may gain ground in first place. So Mets, can you please #BashTheBraves and #ChopTheChop?

I think the Nats will sweep Denver. Other than Tulo and Morneau, there is not too much star power in this Rockies lineup able to do serious damage.  Keep an eye on Bryce Harper on his return from the DL on his bobblehead night.  I hope he hits a tater on the return from the DL just like he did exactly 364 days ago. So lets go get a Curly “W” or 3!

#RALLYMATTSBATS (I’ll be there on Tuesday!)

Like Loading...
‹ Scouting Report- Washington Nationals at Chicago Cubs
The MattsBats.com Picks for the 2014 MLB All Star Game ›