Every year, the winners of the “big 4” sports championships, as well as some collegiate sports champions, visit the White House to be honored by the President of the United States. .

On Thursday, July 21, it was time for the 2015 Major League Baseball World Series Champion Kansas City Royals to be honored by POTUS.  I was invited to cover the event for MattsBats.com, the second time in a year that the White House Press Office gave me press credentials (I also covered the Presidential Medal of Freedom ceremony in November).

We arrived at the White House at around 10:35 am, even though the event didn’t start until about noon.  After entering through the Northwest gate on Pennsylvania Avenue and going through Secret Service security, we went to the press briefing room where all the other journalists were camped out.  Since it was a weekday morning, the room was packed with people who were working at their little cubbies.  Press Secretary Josh Earnest (a die-hard Royals fan who was present at the ceremony), was giving his daily briefing, so it was very cool to see that live.

I had a little bit of time to play before the event, and I learned that the White House is a Pokestop!  Josh Earnest even mentioned during his briefing that people playing Pokemon this summer should be safe and aware of their surroundings.

.@PressSec just reminded everyone to be safe while playing Pokemon. https://t.co/u524YSifcC

//platform.twitter.com/widgets.js
At 11:25, the pre-set started in the East Room. That’s when the press set up their cameras and claim a spot in the line.  We went in through the front door of the White House and turned left into the East Room.  After getting set, we went back outside and waited again in the press briefing room (which is the long corridor that connects the White House to the West Wing).

A few minutes before the event started, press was called into the East Room again.  By that time, many of the guests had arrived.  There were lots of people wearing Royals gear- and some people were dressed very casual for an event at the White House.  Soon after, the Royals players, manager and owners were introduced, and the crowd started chanting “Let’s Go Royals!”  Finally, the President came into the room too. President Obama welcomed some of the dignitaries, including Sen. Bob Dole, George Brett, former Secretary of Health and Human Services and former Kansas governor Kathleen Sebelius.  It was a happy occasion, so the President made a few jokes.  He pointed out the son of Kansas City, Kansas mayor Mark Holland, who plays shortstop for the little league Braves.  He also poked fun at some of the nicknames the Royals players have– like “Hos” for Eric Hosmer, or “Moose” for Mike Moustakas, “Gordo” for Alex Gordon, and “Salvy” for Salvador Perez– for lack of creativity.  “It’s like Barack ‘Barack’ Obama, you know?”  Everyone laughed.

General Manager Dayton Moore presented the President with a jersey signed by every member of the Royals. It was a ceremony enjoyed by everyone in attendance, even if it was pretty short.

After the ceremony, the press were redirected to an area just outside of the entrance to the West Wing where some players, coaches, and team officials were going to answer questions. This is what’s called a “stakeout.”  There was a crowd of about 20 or so professional journalists, and me in the media scrum.  But I was able to yell out a question to first baseman Eric Hosmer, who answered my question.  It was the first time I had done something like that, and I was a little nervous about it! “You’ve won the All Star Game MVP, the World Series, and you just got to meet the President, what a year it’s been for you!” I asked.  “Tell us what that was like.”  “It’s been quite the year, it really has.  This really topped it off.  Remembering what we did last year, and coming here [to the White House] and having the President acknowledge what we do is truly special for all of us.” 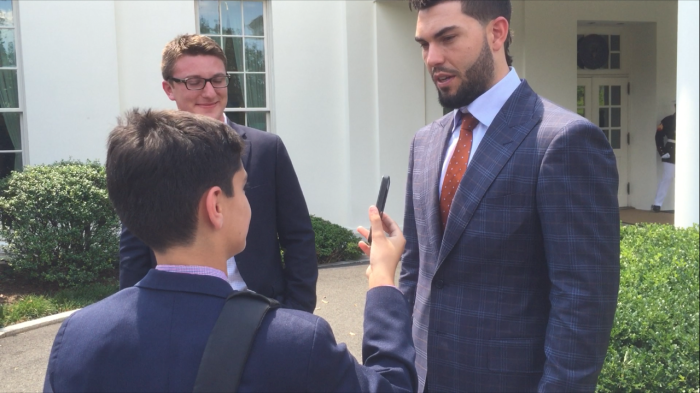 This was another amazing experience, but I have to say, I was a little jealous of all the fans wearing KC Royals blue.  Next year, I hope we’ll be celebrating the Nationals at the White House. That wouldn’t be too bad!