Home › Uncategorized › My Coverage of the Presidential Medal Of Freedom Ceremony

My Coverage of the Presidential Medal Of Freedom Ceremony

Last week, I had one of the most amazing experiences since I started MattsBats.com.  I had the chance to visit the White House to attend the Presidential Medal of Freedom award ceremony as part of the press pool.  On November 24, 2015, President Barack Obama awarded the medal to 17 Americans who have made especially meritorious contributions to the security or national interests of the United States, to world peace, or to cultural or other significant public or private endeavors.  I was invited to cover the event because the President awarded the Medal of Freedom to baseball Hall of Famers Willie Mays and Yogi Berra, who died in September.

Willie Howard Mays, Jr. was born in segregated Alabama in 1931.  He made his major league debut in 1951, and became one of the best baseball players in history.  President Obama said, “we never saw an all-around five tool player like Willie before and haven’t seen one since.” He stepped into the history books as a 2-time MVP, with 660 career home runs, a .302 lifetime batting average, 12 Gold Glove awards, and 24 All Star appearances.  In awarding the medal to Mays, President Obama said: “It’s because of giants like Willie that I even thought about running for president.”

Lawrence Peter “Yogi” Berra was one of our country’s most beloved and memorable sports heroes. “What could be said about Yogi Berra that he couldn’t say better himself?” President Obama remarked.  He was one of the greatest catchers in the history of baseball and had “the winningest career in the history of American sports.”  He was a 15-time All Star, winner of 10 World Series championships, and a three-time league MVP.  He is also a veteran of the U.S. Navy during WWII.  He fought on D-Day at Omaha Beach and came home with a Purple Heart.  President Obama presented Yogi’s award to his son Larry. 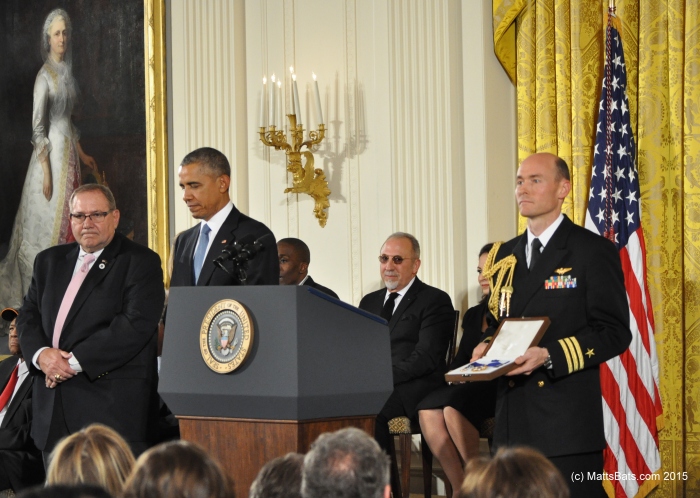 Now, let me let you in on what it’s like to go to the White House as credentialed media for an event like this.

The event did not start until 5:00p.m., but you obviously need to be there early.  I left school very early: at 11:50 a.m. After running home and getting dressed in a suit, my mom and I hopped on the Metro to head downtown to the White House.

We arrived at the Northwest gate of the White House on Pennsylvania Avenue a little before 2:00 p.m., which was the time press could start pre-set.  The Secret Service checked our IDs and made sure we were on the list, and then we had our bags screened and walked through a metal detector like at an airport.

Once we were through security, we walked on the driveway to a courtyard between the West Wing and the Residence. While on that walk, we saw the stations where the cameras and news reporters are stationed to report from the North Lawn.

While waiting there, we saw the most famous dogs in America, Bo and Sunny! They were coming in after their walk. 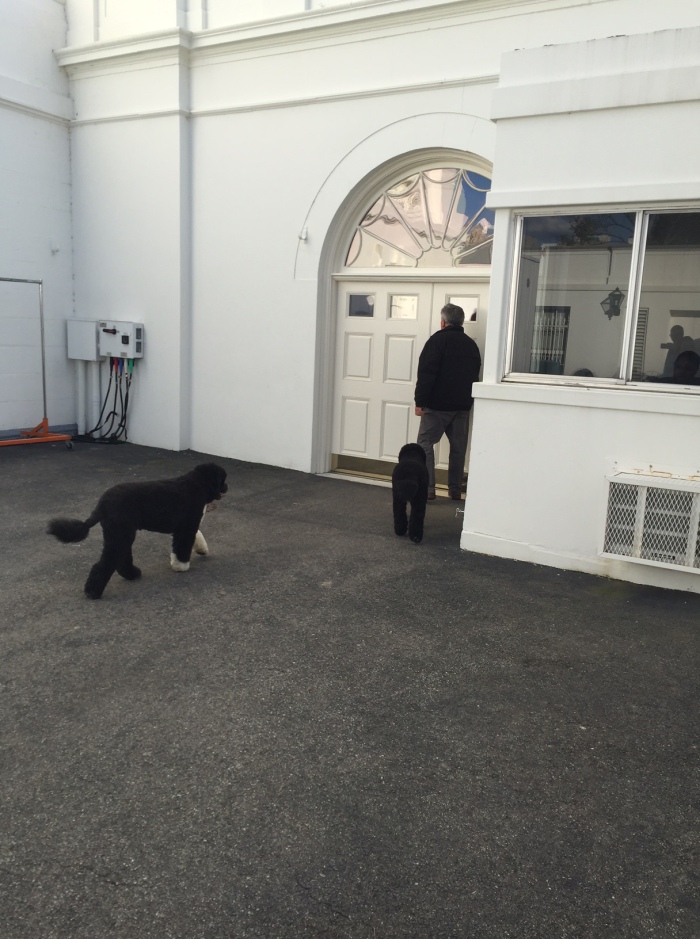 When all the press members arrived, we went up into the White House, through the front door.  We made a left into the East Room so all the reporters could claim a spot and set up equipment.

After that, we went to the Press Briefing Room to wait while the White House staff got the room ready for the event.  To get there, we walked back outside the White House.  It’s along the corridor connecting the Residence to the West Wing.  The Briefing Room is the room you see when President Obama or White House Press Secretary Josh Earnest is giving a press conference on television. 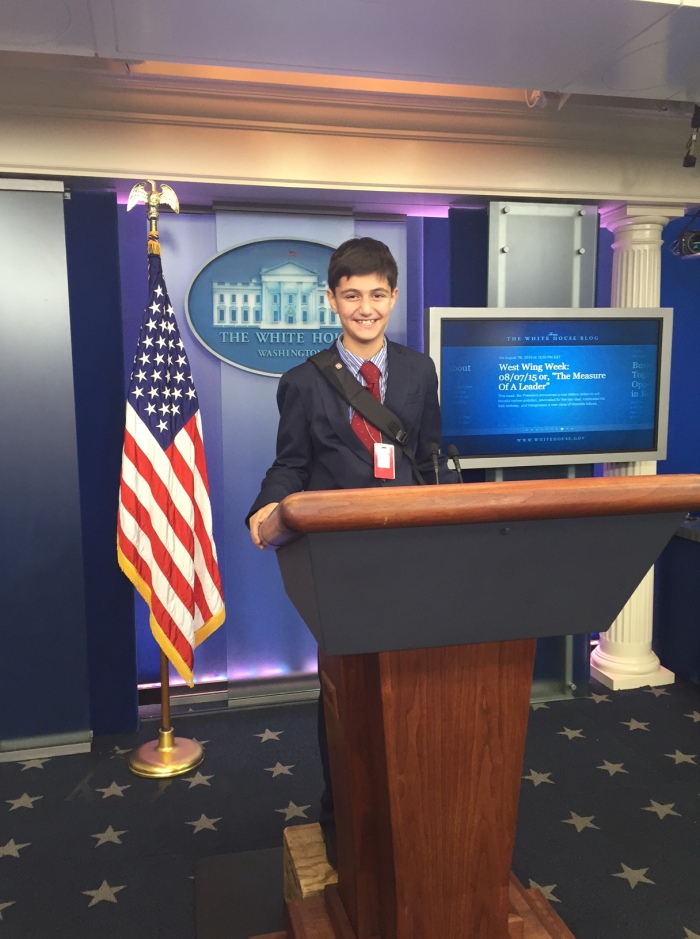 We were waiting in the Press Briefing Room for a while and decided to explore.  Located behind the room are puny offices for the White House Press Corps.  There are also some vending machines there. It was very cool to see behind the scenes of how news is made. Everyone was really nice to me and showed me around the space.

After waiting for a while, they called for us to return to the East Room.  We entered the White House again, this time to music played by the White House Marine Band. Guests trickled in, including some famous guests like will.i.am, James Brolin, former attorney general Eric Holder, Rep. Steny Hoyer, DC delegate Eleanor Holmes Norton, and former Transportation Secretary Norman Mineta, who has a cane made out of a baseball bat.  At around 5:10, the honorees were introduced, followed by a sudden crescendo in the music. Hail to the Chief started playing.  Everyone stood up, and President Obama and Michelle Obama entered the room.  He welcomed the crowd and spoke.

I knew about some of the honorees, like Berra, Mays, and Spielberg, before, but I had never heard about people like Shirley Chisholm, Katherine Johnson and Minori Yasui. When President Obama introduced them and spoke about their lives and accomplishments, it was so interesting. Each person who received the award did something really great to help our country.

After the ceremony, some of the honorees came over to the press for interviews. I was hoping to be able to see Willie Mays, but unfortunately, he went home early so I didn’t get the chance to interview him. But I was able to take a picture with Steven Spielberg, and get close to some of the other award recipients, including Barbara Streisand, James Taylor and Itzhak Pearlman. 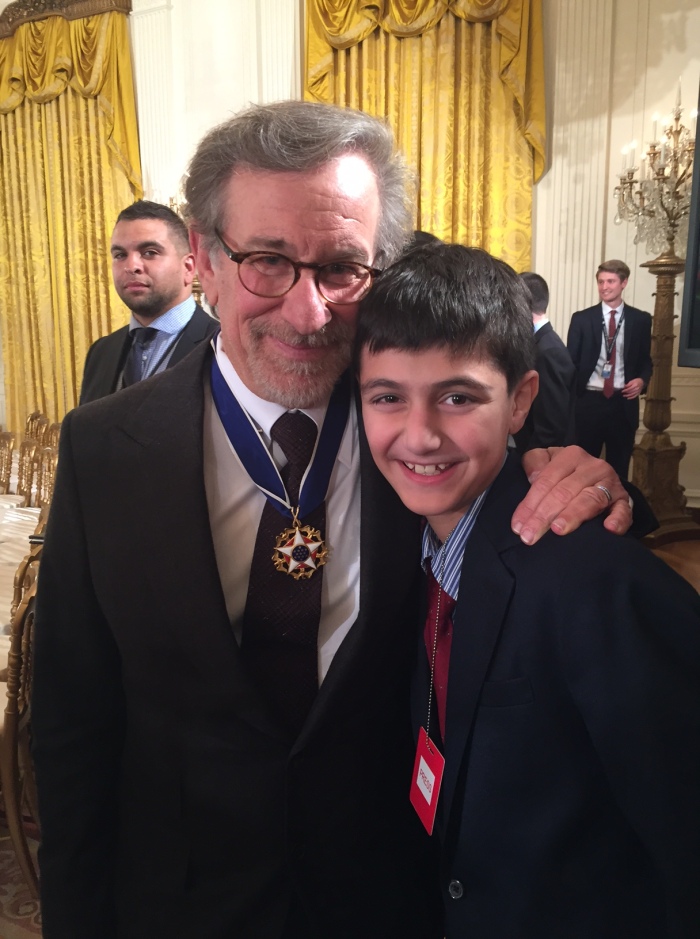 The whole ceremony lasted about a hour.  When it was over, the invited guests stayed for a reception, and the Marine band played music relevant to the honorees, like the theme song from E.T. and Don’t Rain on My Parade.  They took the members of the press out of the building through a back way out the East Wing.  We saw a portrait of Hillary Clinton and a bust of Henry Clay, yes, made out of clay.

It was really amazing being able to take in this ceremony firsthand from the historic East Room of the White House and to be in the same room as some of the most famous and celebrated Americans in politics, music, sports and science.

BONUS COOL FACT: In the East Room, there is a famous portrait of George Washington by Gilbert Stuart called the Lansdowne Portrait. When I saw it, I recognized it and asked my mom if that was the original. She said yes because it’s hanging in the White House!  Well, later that week, we went to the Smithsonian National Portrait Gallery. While walking through the Presidents exhibit, we saw the exact same portrait of Washington! I was confused. How could it be in two places? Here’s the explanation: The National Portrait Gallery has the real, original one, not the White House!  My mom was wrong.  The one at the White House is a replica, but painted by the same artist. There are, in fact, more replicas by Stuart in the Old State House in Hartford, Connecticut and the Pennsylvania Academy of The Fine Arts Museum in Philadelphia. Also, copies not painted by Stuart are located at the US House Chamber and the Rayburn room of the Capitol. How can you tell the copies from the original?  “In the copies, the book at the lower left hand of the picture has “UNITED STATES” intentionally misspelled as “UNITED SATES.” I wish I had known that when I was in the White House so I could check it out for myself!