Welcome to the Bigs, Nathan Karns and Erik Davis!

The Nationals, poisoned with injuries in early 2013, called up 2 important rookies this week: pitchers Nathan Karns and Erik Davis. Davis made his debut Sunday at Atlanta pitching two scoreless innings of relief, while Karns debuted as a starter on May 28 against Baltimore.

Erik Davis was drafted in the 13th round by the San Diego Padres, out of Stanford University. Davis pitched alongside Drew Storen.  He has been pitching in the Nats AAA Syracuse team this year and last. He’s been 1-2 with a 3.00 ERA in Syracuse this year.

Nathan Karns was drafted in the 12th round of the 2009 June Amateur Draft by the Nats, but he was also drafted by the Houston Astros in the 10th round of the 2006 June Amateur Draft. He smartly signed with the Nationals.  He went to Texas Tech and has been pitching in the Nationals’ AA Harrisburg team this year before his call-up.  He made his MLB debut in a spot start when Ross Detwiler went on the DL on May 28.  Karns pitched well against the Orioles, but gave up home runs to Chris Davis and J.J. Hardy.  That’s not so bad, because probably every starting pitcher has given up a home run to Chris Davis by this point.  The Nats won the game 9-3, but he didn’t get credited with the win because he came out of the game with 1 out in the 5th, and Zach Duke got the next 2 outs and was given the win. 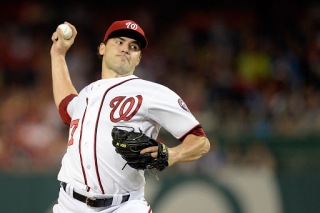 Karns started again in Detwiler’s place on Sunday in Atlanta.  He was credited with the 6-3 loss to the Braves, but he struck out 6 batters in 4 2/3 innings.  Pretty good!  Again, he gave up 2 home runs in the Braves game.  In total, Karns has pitched nine innings, giving up 7 runs. Six of them were earned. The unearned run came on Sunday when Ryan Zimmerman had a throwing error that allowed Andrelton Simmons to go to first. Then, one of the rarest things in baseball happened: Ramiro Pena hit a homer.  He’s pitched both games in bad weather, so I think he is going to settle in next time out against the struggling Twins.  If Detwiler is out for a while, Karns will make three of his first 4 starts against AL teams (Orioles, Twins, and Indians).

Together, Karns and Davis create a force in the Nats pitching staff.  Although he has only played one game, Davis has been perfect.  Literally.  He hasn’t allowed a hit  That’s important for a rookie.

They also represent an upgrade to the current pitching staff.  Karns and Davis have both pitched better than bullpen regulars Zach Duke and Henry Rodriguez.  I wouldn’t be surprised if Duke and Rodriguez were sent back to the minors or traded and Karns and Davis were made permanent call-ups on the big league team.  Karns could slip easily into Duke’s role of long reliever when Detwiler comes back.  He and Stammen have both been great in that role, but it is nice to have a lefty (which Karns is not).  Davis has made 1 MLB appearance, but he definitely looks better than Rodriguez who can throw a fastball 100 mph but usually not in the strike zone.

The stars of tomorrow are important to needy franchises early in the year.  I hope we get to see Karns and Davis a lot more.

TODAY IS A NATS OFF DAY.  TOMORROW’S GAME:

Tracking the Braves, they take on the fearsome Pirates who have one of the top 3 records in the National League.  This is a chance for the Nats to gain some ground on the Braves if we can pull off some wins and the Braves get handed some losses.