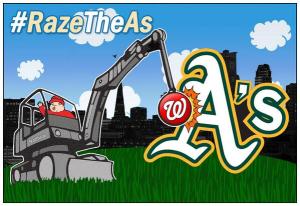 By the time this gets published and tweeted, I will probably be asleep, unless I can convince my mom and dad to let me stay up to watch tonight’s Nationals game.  My clock in my room is set for Pacific time.  If you are reading this, then the auto-publishing feature of MattsBats.com worked and you are up late to watch the Nats in their first West Coast road trip of 2014.

The Nats are on a roll! After sweeping the Astros, the Nats have gone 5-3 since. The Nats pulled off an unexpected series victory against the Dodgers, who put up 3 starters who hadn’t lost this season. The Nats beat Zack Greinke and former Nat Dan Haren. Is it surprising that Dan Haren lost a game in Nats Park?  The game was actually pretty close (the Nats won 3-2) and it was different than Haren’s season in 2013, when he would give up a ton of homers and be pulled in the 4th.

After an off day yesterday, the Nats had to take a 5 hour flight to the Bay Area for the start of tonight’s series against the Oakland Athletics.  Many Nationals players will feel at home in Oakland, because they come from Northern California or played for the A’s before joining the Nats. Doug Fister, Kevin Frandsen, Erik Davis, and Jeff Kobernus, and Ryan Mattheus are all from the Northern California area, and Gio Gonzalez was an A before he came to Washington, and so was Jerry Blevins and Scott Hairston. Fister makes his debut as a Washington National this #FisterFriday, and I bet a lot of friends and family from his hometown of Merced will be a the O.co Coliseum to see him.

The Nats are facing Tommy Milone (what team was he on before the A’s? Oh yeah, the Nats!), Sonny Gray, and Scott Kazmir. Can the Nats actually beat the A’s, which happens to be my favorite team in the AL?  Can they top Josh Reddick, Yoenis Cespedes, Josh Donaldson, Coco Crisp, Brandon Moss and the rest of the As?

Even though Oakland is a good team with a possibility of making it far into the post-season this year, I like the Nationals’ chances in this interleague matchup.  They swept the Astros in one AL West matchup, and took 1 out of 3 from the Angels in the other interleague series they have played.

The advantage this series for the Nats is their pitching lineup.  Oakland is posting the Milone, Gray and Kazmir, who are all very good pitchers, but the Nats will miss Jesse Chavez.  The Nats are putting up Doug Fister, Tanner Roark and Gio Gonzalez, which is a rotation I don’t think any hitter in baseball wants to see.  Tanner Roark is not Stephen Strasburg or Jordan Zimmermann, but he did pitch a 3-hit complete game against the Padres at the end of April.  The Nats bullpen has been awesome recently.

Because of the Nats’ pitching and the way the offense has been generating clutch hits and even come-from-behind-wins, I wouldn’t be surprised to see the Nats win 2 out of 3 this weekend, or even a sweep.  So far my predictions this year haven’t been so good, but still, I am looking for the Nationals to: