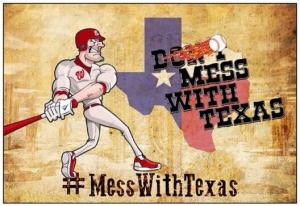 It has been a long time since I have published a Matt’s Bats scouting report.  Is it a coincidence that during that time the Nats have been playing really bad?  The Nats were haunted the past two series, with the offense shutting down, the bullpen handing over a few losses, and regular lefty reliever Jerry Blevins dropping two games during that 7-game span. Actually, since my last Scouting Report during the Reds series, the Nats are 2-7 and were swept in two by the Miami Marlins. Someone needs to heat up the Nats!  We need a new fan hashtag to tweet during the games!  (See it at the end of this post)

This might be the worst time for the Nats to face the tough Texas Rangers, who have been on a tear with runners in scoring position. Yesterday they pulled off a 5-4 upset over the Twins, who have been the underdogs in a tough AL Central with Detroit and Kansas City. The Nats are also playing some tough pitchers, like Yu Darvish. Last time he played, Yu left early with neck stiffness after giving up a lot of runs. The start before, however, he almost no-hit the reigning World Series champs, the Boston Red Sox.  He will be pitching at Nationals Park on Sunday, and I am glad I will be there in person to see both his debut at Nationals Park and his debut against the Nats.

During the series, the Nats are posting Strasburg and Fister.  Fister might have success against the Rangers, because he has faced them before in the American League, but the Rangers have hit him for a .340 average and he has given up 3 home runs. Because Nick Tepesch is starting on Saturday, the Nats would have pretty good chances if they’re offense kicks into gear.

Shin-Soo Choo is the one guy we need to keep off base. He has hit 2 HRs and 5 RBIs with 9 hits off Fister. However, Fister has struck him out 4 times. Hopefully that number will rise by Saturday night.

Sadly, the Nats and their struggling offense look like a sweep-friendly team. The Rangers might take all 3 or 2 out of 3, but Strasburg’s start today and Fister’s on Saturday are their best chances this weekend for a win.

Also, let’s root for the Marlins, who are facing off tonight against the struggling Braves.  The Braves just got swept by the Boston Red Sox, who came in with a 9 game losing streak. Craig Kimbrel gave up a walk-off and recorded his first loss.  If the Marlins win tonight, they will be alone in first place in the NL East.  The Nats have played much better against the Marlins than the Braves, so Nats fans want the Marlins to win.