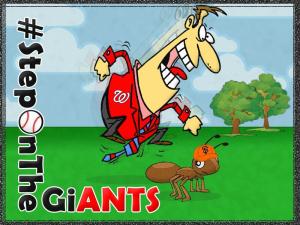 Finally!  For the first time this year, I got my series preview right!

I correctly guessed the Nats beating the San Diego Padres in the 1st game, losing in the 2nd game, and winning in the 3rd. The pitching, led by super starters Tanner Roark and Jordan Zimmermann, was phenomenal, but Rafael Soriano had some struggles in game 2 which ended up in a 3-4 loss because of a Cameron Maybin walk-off single.

The Nationals are now tied for first in the NL East with the Braves with a record of 32-29.  Now the Nats are facing a little test. OK, maybe A BIG TEST!

The San Francisco Giants, led by their speedy sluggers in the outfield,  have been really good this year. In fact, they have been the best this year.  They have an MLB-leading record of 42-21.

They have been really hot, but hopefully the Giants will cool down with this series against the Nationals.

They are mostly getting offense from former National Michael Morse.  Some of the best memories for Nats fans was in 2012 when Morse used “Take On Me” for his walk-up song and the whole stadium sang along.  For me, those are like the best memories of being a Nats fan.  Sadly, Morse brought his “Take On Me” tradition across the country and now all the fans at AT&T Park get to have the fun of singing “I’ll be gone in a day or twoooooooo!”

Morse was not really a big factor with the Mariners or the Orioles last year, but it seems like when the Nats stopped playing “Take On Me” in the 7th inning stretch a few weeks ago, he started to heat up. Maybe he will be so excited to see his old friends from DC that he will lose his concentration and strike out a lot.

The Giants also have a nutso record this year, winning exactly two times as many games as they have lost.  They are on pace to win more than 100 games.  This basically grants them a series victory. I’m sad to say that I predict that the Nats will lose 3 out of the 4 games, Strasburg getting a win tonight against Vogelsong. The Nats once beat Vogelsong 14-2 in a game Stras started.

Madison Bumgarner versus Doug Fister is a game I would love to see, but it starts way too late at night.  And as good as Tanner Roark is, I think Matt Cain, who threw a perfect game in 2012, is even better.  I am hoping for Blake Treinen to get his first Curly W, but the Giants have not yet announced their pitcher.

I know the Giants are phenomenal, but it is soon going to get frustrating how good this team by the bay actually is.  If the Nats can split the series 2-2 or even pull out a 3 out of 4 win, that would be fantastic and a good sign.  But my prediction is that it will tip the other way: 3-4 Giants.