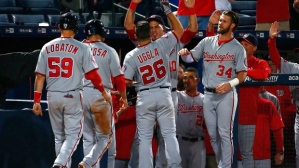 If you were to travel back in time to the third inning of last night’s game and tell a Nats fan that the Nats would come back from a 9-1 deficit, they would stare at you like you were from Venus. Well, you’re not from Venus.  By the end of last night’s game, a miracle happened in the Big Peach. Backed by homers by Jose Lobaton, Denard Span, and the eventual game winner in Dan Uggla, the Nats won a wild one down in Atlanta.

Bryce Harper got things started in the first inning by doubling in Denard Span, but as quick as you can say “Coca Cola”, things got ugly. A.J. Pierzynski hit a sac fly to bring in Nick Markakis, and Alberto Callaspo doubled in Freddie Freeman. Then, Atlanta got 7 runs to make it a 9-1 game by the third inning, making it look like the game was a total bust.  That’s when I tweeted:

Nats games aren’t fun when they’re losing so badly. Maybe read a book or watch something else until they’re fun and exciting again.

and I turned off the TV.

After that, Jayson Werth and his beard drove in Span to make it a 9-2 game.  The Braves and Pierzynski drove in a run to make it 10-2, basically a 3rd inning win for the Braves, right? No. Werth got another sac fly, and Jose Lobaton cranked one over the left field wall to make it a 10-6 game in the 5th. The next inning, Denard Span unleashed a solo shot over the scoreboard on the right field fence to make it 10-7. Pierzynski made it 11-7 by doubling in Freeman, but in the 7th, Dan Uggla doubled in two to make it 11-9.  Right after that, Reed Johnson hit a ground-rule double to make it a 1-run game. (Pitcher Doug Fister pinch ran for Johnson because he injured himself of the play– another injury for the Nats!)  Pierzynski got ANOTHER RBI and made it 12-10, but that’s when the miracle happened. In the 9th inning, Uggla took Jason Grilli’s pitch and sent it soaring over the left field fence for a 3-run blast.  The Nats were leading in the top of the 9th 13-12.

FLASHBACK!– It’s a Friday, July 20, 2012, and you are at Nats Park. You were treated to a good game, with Stephen Strasburg on the hill and the Nats leading 9-0 after 5 innings. The Braves have a big 6th scoring 4 to make it 9-4. Another 4-run inning makes the game 9-8. Then, when things couldn’t have gone more uglier, Michael Bourn tripled in Dan Uggla and Paul Janish to make the game 10-9. Ugh! They were winning 9-1 and now losing 10-9! You saw Danny Espinosa homer to left off Kimbrel to tie it up, but Janish drove Uggla in on a weak pop fly to Ian Desmond. Soon later, Atlanta won.

Last night we got our revenge.

Nationals fans needed this win!  This was the biggest deficit they’d overcome since the Montreal Expos franchise moved down to Washington. Even when they struggle, they always get back on track. Hopefully this sparks a turning point in this bad season so far.