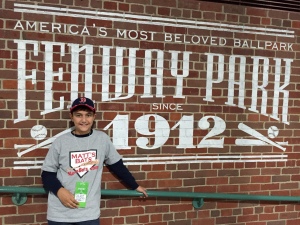 As many of you know, I visited Boston, Massachusetts over Memorial Day Weekend. I had a great experience at Fenway Park, the home of the Boston Red Sox since 1912. It is the oldest baseball stadium in the MLB. Keep reading to see some of the pictures and hear about my amazing encounters with Mike Trout, Hanley Ramirez, Mike Napoli and others.

Before I tell you about my experience, I’ll tell you about the history of Fenway Park.  James E. McLaughlin, a builder from Boston, Massachusetts, got a plot of land in between Ipswich and Lansdowne streets in downtown Boston to build a ballpark in 1911.  Construction finished in 1912.  Now, 103 years later, Fenway Park is one of the most popular spaces in Boston.   The Red Sox won the World Series in the first year they played at Fenway Park, then not again for 86 years, in 2004, the year I was born.

The largest crowds in Fenway History came not in 2013 (when almost 37,500 fans watched the Sox win the World Series), but in 1914, when 50,000 people came to watch three elephants parade though the streets on their way to the Franklin Park Zoo!

One of the most unique parts of Fenway Park is the Green Monster, the highest wall in a MLB ballpark.  It is 37 feet tall and 240 feet long and looms over left field.  Balls hit off the Green Monster are in play, so you’ll often see outfielders set themselves up to play the ball off the bounce.

The Green Monster holds the only ladder on a major league field of play and a manual scoreboard. For the first 91 years of Fenway Park, you couldn’t sit on the Green Monster, but starting in 2003 you can now sit and watch a game from seats built into the top.  For die-hard Sox fans, you can actually buy the exact same paint they use at Fenway at Benjamin Moore stores in Maine, Massachusetts, Connecticut, New Hampshire, Rhode Island, and Vermont.

The deepest part of Fenway Park is in straight-away centerfield, at 420 feet from home plate. Fenway is tied with Comerica Park in Detroit for the 2nd longest distance from home plate to center field, more than Marlins Park in Miami and 15 feet smaller than Minute Maid Park in Houston.

A lot of people compare Fenway to America’s other iconic baseball stadium, Wrigley Field, which I visited last year on its 100th anniversary. Fenway has the Green Monster, but Wrigley has the ivy covering their brick outfield walls.  I think Fenway has a little more charm to it, but maybe that’s because they’ve spent a lot of money renovating it and making it a comfortable place to watch games.  They have built in displays of memorabilia in the walls, so you can learn about things at the game.

One of the museum-like displays around Fenway Park.

Wrigley is starting to go under construction now, so it’s probably more fair to compare Fenway to Wrigley in a few years from now.  Wrigley has added a couple of videoboards, but Fenway added three jumbotrons in 2011.

Now, let me tell you a little more about my amazing day.  We got to the stadium about 4 hours before the game because the Red Sox left pre-game field passes for me.  First, though, we walked around the ballpark and took pictures.  We went to the top of the Green Monster and went in the seats up there. I tweeted it to #myFenway and my picture ended up on the Fenway Park videoboard during the game.

I also sat in the red seat in right field, which is where Ted Williams hit the longest home run in the history of Fenway Park.

Then we went down to the field in the nearly-empty stadium.  It was really cool that I was stepping on the same dirt that Ted Williams, Carl Yastrzemski, and George Herman “Babe” Ruth stood on in years past.  There were tour groups that were there for the majority of BP. If you ever visit Boston, you can join a Tour Group that gets you on the field and up to the Green Monster.

Some highlights from batting practice: Mike Napoli tossed me a baseball, which I later got Hanley Ramirez to sign when he was mingling with the fans.  That night during the game, Napoli hit 2 home runs.  Ramirez didn’t hit any during the game, but during BP he hit a series of humongous homers, some of them clearing the Green Monster and landing on Landsdowne Street. 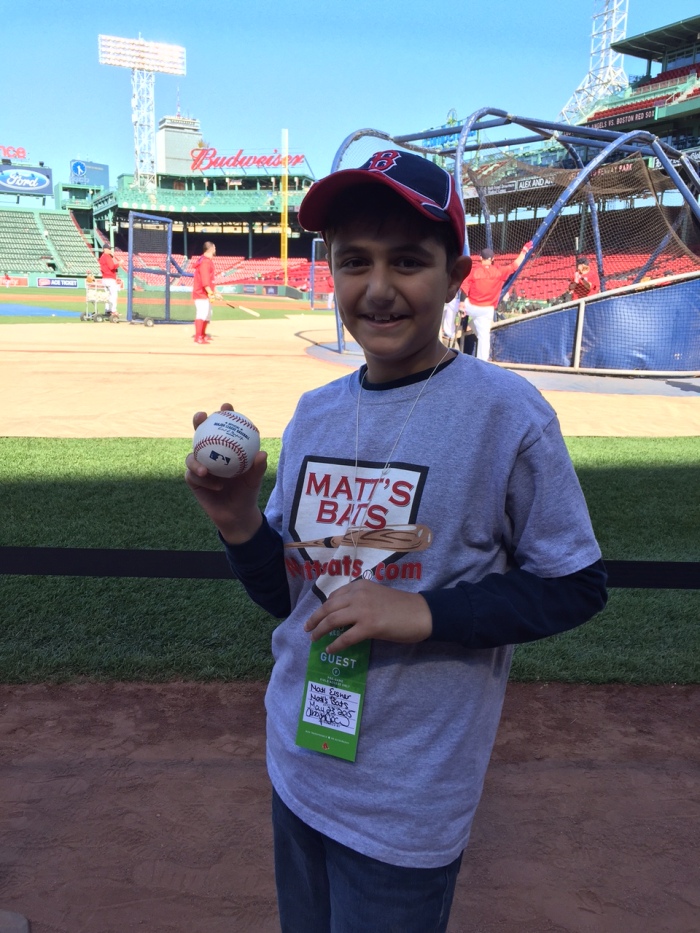 While the Angels were taking BP, bench coach Dino Ebel came over to the sidelines.  I saw he was holding Albert Pujols’ glove, and he let me try it on.  Pujols is a future Hall of Famer, so this was an incredible opportunity.

The biggest highlight was when one of the best players in baseball, Angels outfielder Mike Trout, came over to me to sign autographs. I was lucky enough to get his signature on my baseball, and I was really excited.

I also got to meet the broadcasters for that day’s game, Joe Buck and Harold Reynolds. They were both interested in hearing about my blog. 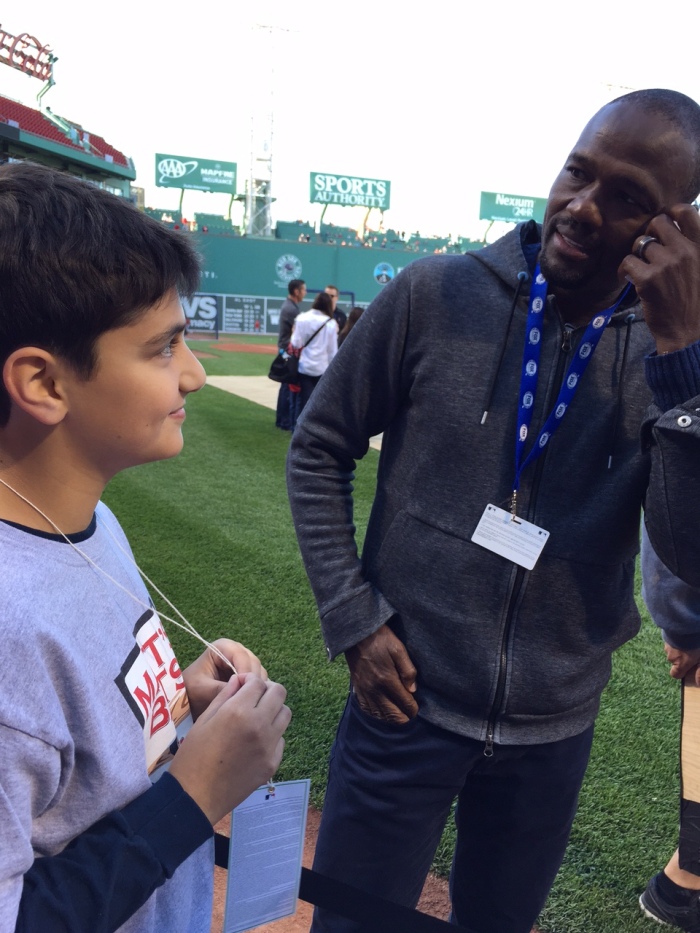 Around 7:15pm, the game started.  We had fantastic seats, thanks to a family friend. Four of them were right in front of the on-deck circle– Section 34 Row 1–and the other 4 were near the batters box in the front row– Section 38. It is so awesome sitting so close.  David Ortiz photobombed us in the background! I got another baseball from sitting so close.  We were on TV a bunch of times, and it was a nationally-televised Fox game. 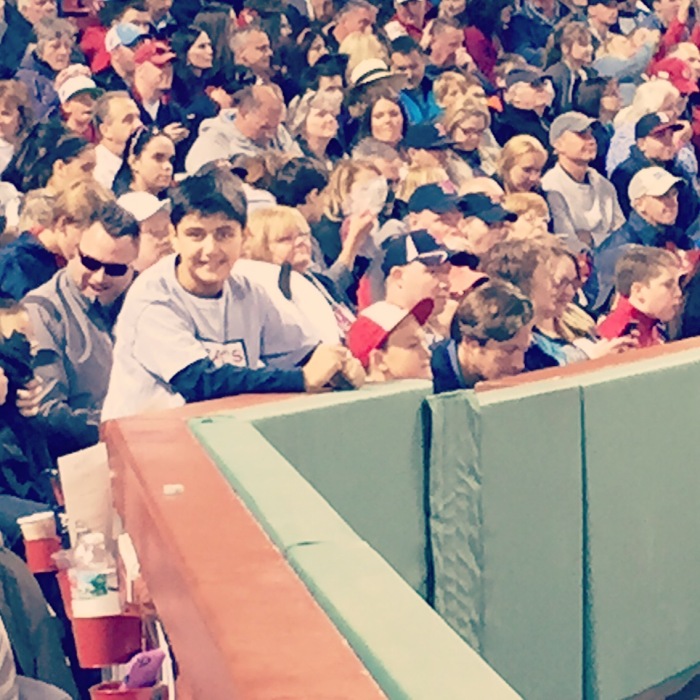 It was also a good game.  Angels outfielder Kole Calhoun opened the scoring with a double off the Green Monster, scoring Albert Pujols and Erick Aybar in the 1st inning off Boston’s knuckleballer Steven Wright. But in the 2nd, Mike Napoli cut the lead in half with a liner over the wall for a home run. The funniest part is that the ball landed just short of a sign that said “HIT IT HERE”.

The view from our seats

The next inning, Shane Victorino was pulled out of the game with an injury, and Mookie Betts replaced him. Betts singled in a run.

There wasn’t any more scoring until the 6th inning, when Mike Napoli creamed a CJ Wilson pitch over the Green Monster and onto Landsdowne Street for a huge homer. That was his second of the game.  After the home team homers, the John Hancock sign above the videoboard in straightaway centerfield blinks and is lit up.

In the middle of the 8th inning, the Red Sox play Neil Diamond’s Sweet Caroline. The lyrics have nothing to do with baseball, but it became a Fenway tradition to sing in the 8th inning.


The Red Sox didn’t end there, getting RBI hits from Xander Bogaerts, Blake Swihart, and more from Mookie Betts.  Mike Trout also recorded an RBI. The final score after Koji Uehara struck out Johnny Giavotella was Red Sox 8, Angels 3. Knuckleballer Steven Wright got his 2nd win and C.J. Wilson got his 3rd loss. Alexi Ogando got his 4th hold. There was no save situation.

I want to thank the Red Sox and Abby from the Media Relations department for giving me this opportunity to go on the field at Fenway Park.  I also want to thank our friends who got us the tickets. It made a special day much better.  I felt like a superstar, and it wasn’t just because a lady asked me to autograph a ball for her! 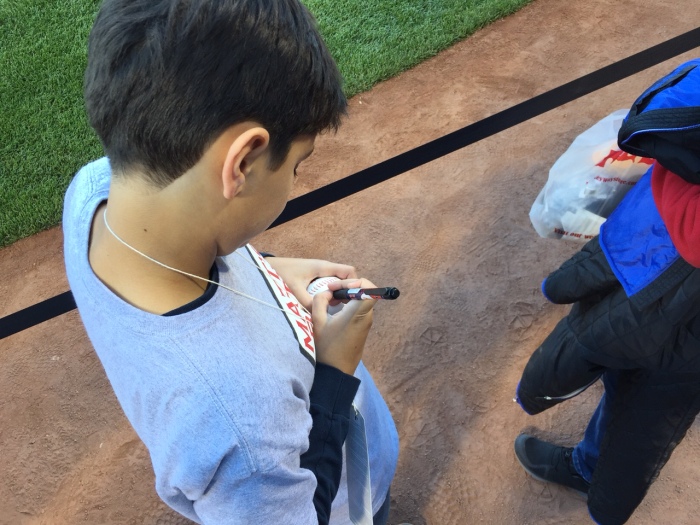 This is the 11th MLB ballpark I’ve visited.  Fenway Park may not contend with the exterior beauty of places like PNC Park in Pittsburgh or AT&T Park in San Francisco.  It may not have as many activities as Petco Park in San Diego, and certainly is not as modern as Marlins Park in Miami.  But it is definitely one of the best places in the world to watch a baseball game and feel both a part of the history and all the conveniences of the 21st century.  I am glad that I had a great experience at a great ballpark, and got to see the home team win.