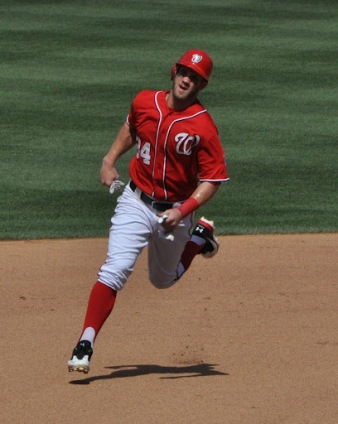 And just like that, the rollercoaster of emotion known as 2018 MLB Free Agency has officially begun, with the Boston Red Sox being crowned world champions over the Los Angeles Dodgers. Some teams have gotten a head start with their offseason ; the Miami Marlins made a huge splash signing Cuban phenoms Victor Victor Mesa and Victor Mesa, Jr, two names that are sure to terrorize NL pitching for years to come. The Washington Nationals also made a trade in October, addressing one of their biggest needs by acquiring relief pitcher Kyle Barraclough from the aforementioned Marlins in exchange for international bonus pool money, which the Marlins used to sign the Mesa brothers, and taking a gamble by also signing menacing relief arm Trevor Rosenthal in free agency. But for the Nationals, more work needs to be done to make up for a disappointing 2018 season. The Nationals’ main job this offseason will be to try and lure free agent Bryce Harper back to the Nation’s Capital.

Harper has been the face of this franchise since he was drafted first overall by the Nationals back in 2010, after he had graced the cover of an issue of Sports Illustrated magazine. He burst out onto the scene in 2012, the same year in which the Nationals made it to the playoffs for the first time since the team moved from Montreal, and the first time the franchise had made the playoffs since 1981. He has since turned into a bonafide superstar, taking home the 2012 NL Rookie of the Year award and the 2015 NL MVP award. He now faces his first free agency experience, and will likely be greeted with hundreds of millions of dollars from the biggest market teams, like the Yankees, Cubs, Dodgers, Phillies, and Giants, along with Washington. So, Bryce, if you are reading this, let us tell you why staying right here, in Washington, D.C., is the best choice for your career.

As Dorothy says in the Wizard Of Oz, there is no place like home. And even though you were born, spent your childhood years, and played high school and collegiate baseball on the other side of the country in Las Vegas, Nevada, you grew up in Washington D.C. Since you made your MLB debut in Los Angeles in April of 2012, Washington has been your home. You helped lift us out of a very rough time in Washington baseball history, when the Nats were consistently under .500 and had not made it to the playoffs in 30 years, the longest postseason drought in MLB history. The city of Washington, D.C. finally had a winning baseball team for the first time since the Great Depression.

Also, no fan base is as loving, kind, and supportive as the one in Washington. If I were a baseball player, there is no way I’d leave this city for a city like Philadelphia, where fans greet opposing players and fans with batteries and beers, or New York, where, I mean, does New York really need an explanation? We Nats fans cherish the great moments you gave to our city. I remember watching the Nationals play the San Diego Padres on a wet May 14th day on my television, with my eyes lighting up the second that your bat made contact with Tim Stauffer’s pitch and watching it sail over the “402” sign in center field for your first big league home run. Who could forget the absolute dinger that you hit off of Carl Edwards in Game 2 against the Cubs to tie the game? And what about the 2018 Home Run Derby, when you won the whole thing (fair and square, pipe down Chicago) while wearing a DC flag headband, and you praised the fans at your home ballpark for giving you the extra motivation you needed to win the Home Run Derby. People wear your name on the back of their shirt all around the DMV. People have named pets after you. Your name is as synonymous to Washington D.C. sports as peanut butter is to jelly.

But there has to be a time where we stop looking at the sentimental value of you coming back to play for the Nationals and look at the benefit that you bring to the baseball field. If you stay, the “Top Flight” outfield would be the best in all of baseball. Bryce, you had another great season for the Nationals this year, starting in the 2018 MLB All-Star Game and having an excellent second half. Your two fellow potential Opening Day outfielders in Washington, Juan Soto and Victor Robles, had breakout 2018 seasons. Soto is, in the opinion of many, the surefire NL Rookie of the Year, and Robles could vie for the award in the 2019 season. The three of you would compose the most energetic, lively, and sheerly talented outfields baseball has ever seen. And the truth is that this team is still very much in contention for a World Series. Your chances of winning in San Francisco or Philadelphia are significantly lower than they are in Washington. Plus, you have openly said that you want to play under Davey Martinez for the next 10 to 12 years. Mike Rizzo has said that Martinez isn’t going anywhere, so your opportunity to play under him is right here in the Nation’s Capital.

If you join the Yankees, you create an incredible outfield with Aaron Judge and Giancarlo Stanton. But the Yankees have some real shotty starting pitching and have not been able to garner postseason success with the current core. The Cubs would reunite you with childhood buddy Kris Bryant, but the Cubs have a statistically worse rotation than the Nationals. You’d be a few hundred miles from Las Vegas on the Dodgers, but that’s a team with budgetary constraints and has intense media pressure, and, although this is blatantly hypocritical, hasn’t had so much postseason success with the core they sport today. If you were to become a Philadelphia Phillie, you’d be joining a real young team with a lack of showcase talent, and you’d also be entering the endless abyss of criticism that is Philadelphia sports fans. And the Giants don’t seem so intriguing, as a team on the decline. A team which checks all of your boxes to further your career success and to realize your ultimate goal of winning the World Series is the Washington Nationals. And although we will support you wherever you decide to take your career, we, collectively, as fans of the Washington Nationals, all encourage you to re sign with the Nationals.