BETHESDA, MD– As the sun set on Saturday, the wind brought chills to all the fans who packed Shirley Povich Field at Cabin John Regional Park. Still, fans kept their eyes on the field as the 2013 Bethesda Big Train Celebrity Softball Classic began. The yells and the cheers from the fans around echoed off the field to the ice rink across the parking lot. Even though the 50 degree temperatures and wind made it feel like a little like springtime in northern Saskatchewan rather than Washington, DC, no one in the whole entire crowd cared because they were having fun watching baseball and raising money for charity.

The Big Train Celebrity Classic, which is in its 2nd year, benefits a charity that fixes and rebuilds baseball fields in the DC area.  This year, a team of 17 professional athletes took on a team of 16 media personalities.  The athletes team included Redskins players such as Chris Cooley, Kai Forbath, Lorenzo Alexander and Ryan Kerrigan; Baltimore Charm quarterback Angela Rypien; Byron Mouton from University of Maryland’s 2002 national champion basketball team, and others.  The media team included Doug Kammerer, NBC4 weatherman; Mike Wise from the Washington Post; Grant Paulsen and a bunch of his co-workers from 106.7 the Fan, and others, like Adam Bradley from Ball Hogs Radio.

Assistant General Manager of Bethesda Big Train Bart Lambergman expected near 1,000 people, but actually thinks they surpassed that on gameday.  “Every seat is taken and we’re at standing room, so we are very pleased with the crowd,” Lambergman said.  The event raised “a sufficient amount of money” for Big Train’s charity, but they haven’t yet totaled up the money from sponsorships and ticket sales.

Former Redskins, now Arizona Cardinals, linebacker Lorenzo Alexander, who was playing for the second year in a row, said he decided to play in the game because it is “for a great cause.  I’m here to help them raise money, using my platform and the things I’ve been blessed with just to help people have some things.”

NBC4 meteorologist Doug Kammerer, who played RF in college and SS in high school, agreed.  “It’s a great opportunity to get together with a bunch of the Redskins and bunch of the other media and raise money for a good charity.”

Looking at the lineups, you would think the athletes would have an easy time with the media team.  Lorenzo Alexander said, “of course we had an advantage!  We’re professional athletes or people who played in college.  Most of those people sit behind a desk all the time.  They’re somewhat athletic but not up to par.”  His teammate Ladell Betts laughed and said “it’s all in fun.  We’re all out there having fun and trying to have a good time.” Chris Cooley, Redskins tight end, agreed, “I would have been disappointed if we didn’t beat the media.  With all the good athletes on the team, we definitely had the advantage.”

The athletes did get off to a good start. They scored three early runs in the second and third innings.

Then, Kevin Shafer of the Kevin and Rock Show on 106.7 the Fan, playing for the media team, stepped up to the plate with fellow broadcaster Rocky Parrish on base. Shafer pounced on the ball and hit it over the fence in center for 2 runs. This was the only home run of the night, and hit by a media guy, not an athlete.  The fences were brought in for the softball game, but it was the only home run.  That made the game 3-2.

The athletes really broke it open in the sixth, scoring another several runs.  Byron Mouton ended the night 2-for-2 with 2 ground rule doubles.  Grant Paulsen of the media team later named him the MVP of the game in my post-game interview with him.  He also liked the performance of Comcast Sportsnet host Chick Hernandez on the media team who “was playing very well in the outfield.  He tracked a couple balls down that I didn’t think he would get to.”  Hernandez also did a somersault as he was running down the first base line on a ball he hit foul.

The game ended with a final score of 10-3 in favor of the athletes.  Paulsen flew out to center to end the game, but nobody was disappointed because it was all just a friendly game. 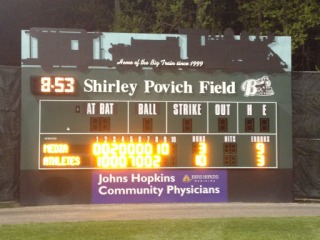 Fans also enjoyed the game.  I talked to Paige Hicks from Ohio and her friend Eric Meleney from Rockville, who came out to root for the athletes.  After the game, all the fans were invited onto the field to meet the players and get autographs.  Lots of kids were also playing on the outfield grass and running the bases.

After the game I interviewed a bunch of the players.  I asked almost everyone which MLB players they tried to play like in the game.  A lot of people, of course, said Bryce Harper, including Redskins linebacker Ryan Kerrigan.  But Kerrigan laughed and said that he only grounded at twice in the game.

Doug Kammerer tried to play like his childhood baseball hero Cal Ripken, Jr.  Kai Forbath, the Redskins kicker, tried to play like Giancarlo Stanton, who he called “Mike” Stanton, because he knew Stanton from when they went to high school together in Los Angeles.  Chris Cooley said that he tried to “hit it hard like Chipper Jones.  And if it goes over the fence, well then it sometimes it goes over the fence.” 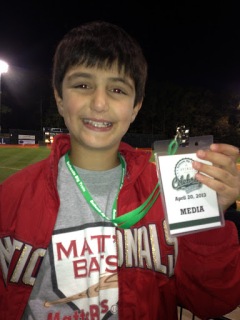 It was so fun covering the game and I thank the Big Train organization for giving me a press credential for the night. I hope I can do it next year, too! For anyone who wants to learn more about the Big Train or the Celebrity Classic, go to www.bigtrain.org. The Big Train plays in the Cal Ripken Collegiate Baseball League (college summer league baseball in the DC-Baltimore area).  They also have camps in the summer for kids.