As many readers know, I just came back from a trip to San Francisco.  While I was there, I went to see a Giants game at AT&T Park.  I noted a few things at the ballpark that I wanted to share with my readers who usually watch games at Nationals Park and to compare the game-watching experience between AT&T Park and Nationals Park. 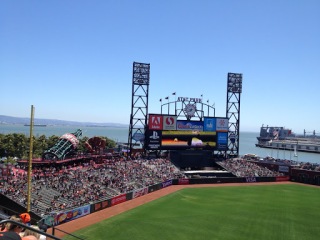 On the other side, in Washington DC…

But for some things about both stadiums, you need to visit them to know them.

At Nationals Park, the players get to choose their own walk-up songs (the songs they play when the batters come up to the plate).  (Also, check out the complete list on District Sports Page). The most famous, is A-Ha’s 80’s hit “Take On Me,” which Michael Morse used in 2012 when he strolled to the plate. Now the Nats use that song after the 7th inning stretch and the fans all sing “I’ll be gone in a day or twoooooooooooooooooooooooooooooo!”

Other Nats players with walk-up music that fans really get into:

The Giants also say that their players pick their own songs, but when I visited AT&T Park, it didn’t seem like that. 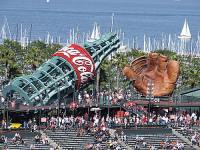 Nationals Park has plenty of options for kids. They reserved an area called the “Family Fun Area,” including a playground, the Exxon Strike Zone, complete with 2 batting cages and two pitching simulations and facts of the game, and a Build-A-Screech Workshop.  The Nats Racing Presidents and Screech also are always around taking pictures and giving high fives to kids.

But AT&T Park is the home of the famous Coke bottle and baseball glove on the promenade, which are actually play areas for kids.  Kids can actually slide down the inside of the Coke bottle.  There is also a miniature version of AT&T Park that kids can play whiffle ball in.  Also, there is a Ghiradelli Cable Car that you can sit in and take pictures. It is actually a cable car that was used to roam the streets of San Fran, but it was retired and brought to the stadium.

Food stands at AT&T Park have special kids meals, which the Nats don’t have.  The Nationals have one Rookies food stand near the playground that sells cheaper hot dogs and other food kids like, but they don’t have kids meals.  They also sell Nats Value Packs (that is not just for kids) at the Nats Dog stands for $8.00 that comes with a hot dog, chips, and a soda. AT&T has a special kids meal for $5 that includes a hot dog, raisins, a juice box, and a prize that all comes in a souvenir pail. The prize in my kids meal was a Giants cape, which sounds a little weird but was actually kind of cool.  Nats Park’s option is more appealing, but at AT&T you get a souvenir.

Finally, this is not really a kids activity, but it is a really cool feature.  AT&T Park takes their luxury box experience to 35,000 feet. To get to the Virgin America Club Level, fans go through a mood-lighted escalator resembling a Virgin America airplane.  We didn’t sit in the club level, but we saw the escalator.

How can Nats Park improve their kids fan experience?  The can install some umbrellas to make the kids area more shady and maybe some misters or fountains that kids can play in and cool down.  A special kids meal would also be good.

San Francisco is arguably the most beautiful city in California. Looking down the hill from Hyde & Chestnut Streets, you have an amazing view of the bay and Alcatraz. In the SoMa area of SF, where AT&T Park is located, you will never miss a kayak or sailboat in the cove and the view of the Bay Bridge.

In terms of the beauty of the city, Washington DC is up there with San Francisco in that column, with our monuments and memorials.  But Nats Park was “sent down to AA” because Ted Lerner built the Red Porch and Parking Garage A that block the view of the Capitol from left-centerfield. 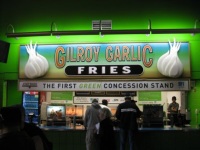 AT&T Park is famous for its garlic french fries that you get from the Gilroy Garlic Fries stand.  They also serve regular fries, too, but it’s their Garlic Fries that are the most popular. They even come with mints!

Here’s a secret though.  The garlic fries are the same ones you can get at Gordon Biersch!  So now that there is a Gordon Biersch across the street from Nats Park (see this post where I write about my lunch there after Nats Park tour), you can have the same San Francisco experience in D.C.

I think the many food options at Nats Park make it even better, like the Red Porch restaurant and famous chili dog restaurant, Ben’s Chili Bowl. The Nats’ version of Ben’s isn’t the complete version, but the Nats put the items most people like on the menu. At the Red Porch in center field, fans enjoy the game from red seats while hanging out in the restaurant. And this is no concession stand. It is a full restaurant.

They might look the same when you see them written out, but they sound very different when announced at the ballpark.  The voice of the Nats PA announcer is a man named Jerome Hruska.  The Giants use a woman named Renel Brooks-Moon.  I am more used to hearing Jerome announce players, but there is really no advantage here to either team.

The Nats also have a group of cheerleaders called the Nat Pack.  I really like them, because they do the t-shirt toss and do a dance on the dugout when they play Take On Me.  They also pump up the crowd before the game.  The Nat Pack also run the Kids Run the Bases at Nationals Park on Sunday, which is a very cool thing to do and not something they allow at AT&T Park.  Sometimes in the middle of the game, Terrence, one of the Nat Pack, runs around like a maniac, which is kind of good and kind of bad.  The Giants don’t have anything like that.

They also don’t have an in-game host who plays games on the scoreboard with fans like Lindsey does at Nats Park.  And, you know what, I don’t think that’s a bad thing.  I mean, if you’re coming to a baseball game, you should be entertained by the game on the field instead of the silly games on the scoreboard.  I admit that like I was 3 or 4 years ago I used to like those games.  But now I keep my eyes on the field!  But I like Lindsey better than Clint, but that is just my opinion.

ADVANTAGE: NATS PARK (but it’s a close one)

People say that AT&T Park is one of the best ballparks in the US.  I agree.  There are some things that are much better than Nats Park, like the old-fashioned feel, the amazing views and atmosphere, the activities, and the great fans.  But in my Ballpark Bash, Nationals Park comes out ahead 3-2.  No matter what, I still love Nats Park!

A lot of my readers are into Twitter, so here’s one last thing that AT&T Park had that Nats Park doesn’t: a social media lounge called @Cafe.  You can charge your phone or iPad there, meet up with people, and follow along with what people are saying with TVs that show tweets people are sending.  AT&T Park also has very good wifi.  Nats Park has free wifi, but it doesn’t usually work.