A Winning Night at the Big Train Holday Auction

On Sunday, November 17, I attended the Big Train Holiday Auction in Bethesda, Maryland. The Big Train is a collegiate summer baseball

team that is part of the Cal Ripken Collegiate Baseball League.  The team is named after Washington Senators pitcher Walter “The Big Train” Johnson, who lived Bethesda after he played for the Senators.  They play at Shirley Povich Field in Cabin John Regional Park in Bethesda, which is named after the famous Washington Post sportswriter.

The auction was at the DoubleTree Hotel, and many baseball fans from all over the DC area were there.  There were also two very special guests: Nationals pitcher Drew Storen and Bethesda native Tim Kurkjian from ESPN.  Both Drew and Tim spent the whole night talking with guests and signing autographs.

This was Drew Storen’s first time attending a Big Train event, but he is already a fan.  He said, “it’s a great organization.  Anytime you can come out and help build some local fields and support youth baseball in the area.  It’s a great event, its my first time and already having a lot of fun.” 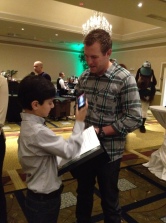 Tim Kurkjian is a long-time supporter of the Big Train.   “I went to Walter Johnson High School.  I played all of my baseball games growing up at Cabin John Regional Park, where the Big Train is located.  Shirley Povich was a friend of mine, and as a sportswriter I used to read him growing up. All of this suggests that I should follow the Big Train because this is where I grew up and it’s very close to me.”

I was able to talk to Drew and Tim, and I will feature our full interviews in future Matt’s Bats Chats during the offseason.

There was a lot of food and music and games.  Tim Kurkjian answered baseball questions from the audience.  The highlight was the auction.  My family bid on a lot of items, but the only things we won included a set of media guides Nats 2005 and 2012 seasons, the Pirates 2008 season, and the Phillies 2009 season.  It’s a little weird but I love the media guides and read them and memorize all the facts.  We also won some restaurant gift certificates.  The bigger winners included Ryan Sullivan of NatsGM and Red Porch Report, who won an autographed Bryce Harper jersey.

My friend Lisa, who is @In2Nats on Twitter, got a whole bunch of items, including a jersey signed by Drew Storen.  Actually, she got a Youth XL (Hey, that fits me!) replica jersey, but Drew Storen promised to send her a game-used one.  Another lady I know, Mary, won an Wilson Ramos autographed bat.

Big Train’s general manager, Adam Dantus, was very happy with the event.  “The event is going great.  We have a great turnout,” he said.  “Drew Storen is awesome.  He’s interacting with the fans.  We’re raising a lot of money for building or rebuilding youth ball fields.”

For more information about the Bethesda Big Train, including the summer baseball league, their special events, summer camps and celebrity camps, go to www.bigtrain.org.