Last month, I had the chance to talk to Nationals reliever Drew Storen at the Bethesda Big Train Holiday Auction.  I have actually met him before, but this was the first chance I got to interview him.  Drew was very friendly and answered a lot of my questions.  He also signed autographs and talked with other fans.  We talked about his expectations for the 2014 season, a little bit about Batman, and then I showed him something he had never seen before—an error in his 2013 Topps baseball card.  Enjoy this Matt’s Bats Chat with Drew Storen!

Drew Storen: We have high expectations.  It’s a matter of building and getting better every year.  We learned a lot in the last two years and we will build off of that and hopefully get ourselves another Division title.

MB: Are you looking forward to Matt Williams as the manager?

DS: Yeah, no doubt.  I’ve heard great things about him, great baseball guy.  You know, I think our coaching staff sticking around too is also going to be a big help.

MB: How do you feel about the addition of Instant Replay next year?

DS: I think it’s going to be interesting to see because it’s something that baseball hasn’t done a whole lot of.  As long as they can keep the pace of the game up and still get the calls right I think everyone will be happy.

MB: What are you doing during the winter months and how are you getting ready for 2014?

DS: I’m kind of relaxing there at first for a couple of weeks and golfing a lot.  Then I’m going to work in some workouts and start getting prepped up until February rolls around.

MB: Coming in to a game in the 7th, 8th or 9th inning is stressful.  Who do you hate pitching to?

DS: I don’t like any hitters.  I would say everybody, how about that?

MB: I know you are a Batman fan, right?

MB: How did you feel about the day Batkid had around San Francisco?

DS: I am very jealous of the BatKid.  I would definitely enjoy doing that one day.

MB: Tell me about your “Batmobile.”

DS: My Batmobile is my everyday effort to try and do that.  It’s a lot of fun.  I’m driving it a little bit more in the offseason.

MB: Ok, I have something to show you.  I don’t know if you’ve seen it before, but I have your baseball card from 2013 Nationals but there’s a little error on the card.

DS: Oh, I got the win in Game 4.  Man, I did not know that!  See you’re teaching me things.  I’ve never seen that before.  Did they mess up anything else?

[Remember, Game 4 was the epic game that Jayson Werth walked off in the bottom of the 9th on the 13th pitch of the at-bat versus Lance Lynn. Game 3 was the day game– the first post-season home game in Washington in 79 years.  The Nats were shut out 8-0, but were closest to a run on an Ian Desmond double.]

MB: No, that’s the only thing they messed up.

DS: I think you need to call them, right?

I spoke a little more with Drew, but that’s all of the interview I recorded for you.  I also got to sit with him for a while and talk informally.  Near the end of the event, I asked if he would follow me on Twitter, and…

I really enjoyed getting to meet Drew Storen, one of the Nationals’ most valuable bullpen arms and maybe one of the best back-end of the bullpen guys in all of Major League Baseball. 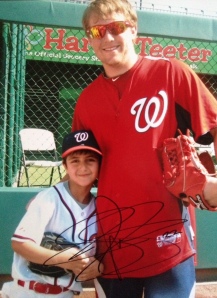 Thanks for reading. Even though I have been so lucky to meet a bunch of Nationals players and talk with them a few questions, this is the first long interview I’ve done with a Nationals player.  (I have also interviewed other sports stars like players from the Redskins and even Justin Verlander).  I’d love to do more interviews. My wish list from the Nats is Ian Desmond, Denard Span (both of who, I know, read this blog!) Bryce Harper, Gio Gonzalez, Doug Fister, and Stephen Strasburg. If you know of any baseball players, journalists, authors or other people who have interesting stories I could talk to, contact me through this link. Thanks!