Special Season Ends With A Bang! 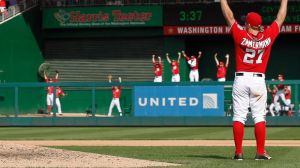 In a season of walk-offs, improbable wins, home runs, and clinches, there couldn’t have been any better way to finish off the 2014 season. Jordan Zimmermann threw the Expos/Nationals’ franchise’s 5th No-Hitter on Sunday, backed by the most unbelievable catch ever by Steven Souza Jr.

The quickest games of 2014 were both pitched by the same man- Jordan Zimmermann. He took a 1-0 loss on June 13th, playing the Cardinals, in 2 hours and 3 minutes, and threw his no-hitter in a stunning 2 hours and 1 minute. The last Nationals/Expos no-hitter was thrown in 1991, before Bryce Harper was born, when the Expos finished with a 71-90 record, and were in 6th place in the NL East. The Brewers were in the AL, the Braves played in the West, Michael Jackson was alive, the popular show The Rugrats debuted, Britney Spears was on a show called Star Search, and Dr. Seuss died. Now, in 2014, the Nationals finished 96-66, and are in first place in the National League East and headed to the playoffs.

The catch was unbelievable. Souza ran like he was racing a cheetah, and out of nowhere he made an AMAZING catch. He stretched out his arm and almost mimicked Jim Edmonds.  As the ball flew in the air, Jordan looked like he’d just lost his no-hitter, but once Souza made the play, the stadium erupted and Zimmermann raised his arms in victory.   I was batting in my baseball game, but when my mom showed me the news, it was cause for a celebration. I couldn’t believe it actually happened. Jordan Zimmermann just made history by throwing the 5th no-hitter in franchise history.