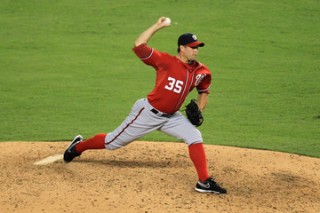 Craig Stammen is your typical long man. You need a guy, left-handed or right-handed, to swoop in and relieve the starter’s day if things aren’t going well early on, and eat up innings. The baseball term for this is perfect: the vulture.

About 365 days ago, Nationals Inside Pitch honored Stammen and Tyler Clippard for their vulture role. After the issue, Stammen became a dominant reliever in the Nats bullpen, from relieving injured starters, to closing games when Drew Storen had the day off, or to pitching extra innings games. Craig Stammen is continuing as the vulture in 2013 and may be the best reliever in the bullpen this year.

Like everyone, Craig had a long road to the majors.  Craig Stammen was born in Versailles, Ohio, on March 9, 1984, 96.1 miles away from Cincinnati. Stammen started playing ball in the Marion Little League, along with future Padres pitcher Cory Luebke. Craig graduated from Versailles High School, where he played a trio of sports- Baseball, Football, and Basketball. He attended the University of Dayton. He majored in entrepreneurship and business management. Craig also made 60 pitching appearances in 3 years at Dayton, and pitched for the Lexington Hustlers in the Great Lakes Collegiate Summer League. Craig was later named a part of UDLegends, a group of the most renowned and respected graduates of Dayton. His baseball career, though, was just getting started.

Stammen was drafted in the 12th round of the 2005 First Year Player Draft, with other Nats such as Ryan Zimmerman and Tyler Moore, and former Nats such as Justin Maxwell (HOU), John Lannan (PHI), and Marco Estrada (MIL). Yes, the 2005 draft, with Justin Upton, Ryan Braun, Troy Tulowitski, Colby Rasmus, Jacoby Ellsbury, Andrew McCutchen, and Jay Bruce.

He was assigned to the Vermont Expos in the Single A New York-Penn League, where he made 7 starts and 6 relief appearances, posting a 4.06 ERA, striking out 32 while giving up 12 walks and 62 hits. All of that was done in 51 innings.

On May 21, 2009, Stammen made his MLB debut. The Nats won, 5-4, sparked by an Adam Dunn base hit that scored the go-ahead. In September, Stammen felt he had a sore elbow. A MRI on 9/3 showed that Stammen had a bone spur, and was shut down for the rest of ’09. He needed arthroscopic surgery.

People may not know this interesting fact about Stammen: he is a sinkerballer. Along with fellow pitcher Ryan Mattheus, Stammen and Mattheus become the Sinkerballer Show, baffling hitters with the tricky pitch. He gets batters to roll over the pitch and hit ground ball outs.