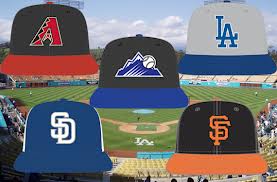 This is Part 2 in my division-by-division preview of the 2014 MLB season.  Last time we looked at the American League West.  Today is my preview of the National League West Division.  Take a look at what I think is in store for the Arizona Diamondbacks, Los Angeles Dodgers, Colorado Rockies, San Diego Padres, and the San Francisco Giants in 2014.

The only thing looking good about San Diego is the weather.  Luckily, I will be visiting San Diego this summer and are going to get tickets to see the Padres play the St. Louis Cardinals. In 2013, I saw San Diego take on San Francisco in SF, and 1B-OF Jesus Guzman started a brawl. I kind of think he is the Brian McCann of the West. Looking at the Padres’ lineup, Chase Headley and Chris Denorfia are some bright spots, as well as new addition Joaquin Benoit.  He was a successful reliever for Detroit.  But overall the Padres do not lo0k good to me this year at all.

The Rockies are going to have a semi-rocky season. How are the Rox going to do in their first season without Todd Helton, who retired at the end of 2013?  My opinion is they won’t be too bad, especially in a hitter’s park.  They have slugger Carlos “Cargo” Gonzalez on the team and one of the best shortstops, Troy “Tulo” Tulowitski.  Everyone loves LaTroy Hawkins, who will be 41 years old this season.  (Read this great ESPN article about the LaTroy Hawkins fan club).   One possible downside: believe it or not, Wilin Rosario is the team’s only catcher.  Rosario has to stay healthy or someone will have to put on the gear, possibly in the middle of a game, if he gets injured.

The biggest loss to the Diamondbacks in the offseason was the Nationals’ biggest gain: Matt Williams.  Williams left his spot at third base coach to become manager of the Nationals.  Still, this offseason, Phoenix’s baseball team added a few key players like Mark Trumbo and Bronson Arroyo.  They also lost players like Adam Eaton and Matt Davidson. Miguel Montero provides quality catching while hitting at a premier level. Newly acquired J.J. Putz and Brad Ziegler make Arizona’s bullpen strong. Paul Goldshmidt was an MVP candidate last year.  That’s a good roster.  Add to it Archie Bradley, a pitching prospect for the club, whois ranked #4 on the MLB.com/prospects list.

The San Francisco Giants are now a baseball household name- they have won 2 of the last 4 World Series played. But we know Giants fans want to add one more title. I know that because I have family in the City By The Bay.  They acquired former Nats fan favorite Michael Morse this offseason.  How much are Giants fans at AT&T Park going to love singing “Take On Me” when he comes up to bat?  They also added former Braves starter Tim Hudson.  Their  pitching is one of the best in baseball because it includes Matt Cain (who threw a perfect game in 2012), Tim Lincecum (who threw a no-hitter last year), Yusmeiro Petit (who almost threw a perfect game last year), Ryan Vogelsong, Madison Bumgarner, Jeremy Affeldt, and Sergio Romo.  Buster Posey, who is one of my favorites, and Pablo Sandoval are known throughout the USA as two of the best major league players in their positions.  The Giants are a very, very good team, but they’re not as stacked as their rivals to the south.

The reigning NL West champs look like they will reach the top of their division again this year.  With a rotation that includes Clayton Kershaw, Zach Greinke, Hyun-Jin Ryu, Dan Haren, and a #5 who could be either Chad Billingsley, Josh Beckett or Paul Maholm.  Add to that a lineup with stars like Adrian Gonzalez, Yasiel Puig, Matt Kemp, and Hanley Ramirez.  Also, closer Kenley Jansen has been compared to Mariano Rivera with his sick cutter, and one of my favorites, former Giant Brian Wilson is on the team.  Fear the Beard!  This will not come as a surprise to anyone, but the Dodgers are one of the best teams in baseball and could make it to the World Series.