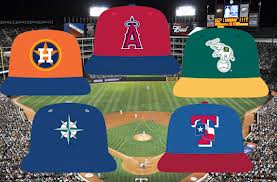 Like I did last year, I am giving all you Matt’s Bats readers a preview of all the Major League Baseball teams for the 2014 season, Division by Division.  Last year I started in the East and moved to the West.  This year I’ll be going West to East, starting with the American League West.

Check out my AL West preview from the 2013 season.  Last year I made the controversial prediction that the Texas Rangers and Los Angeles Angels of Anaheim would end the year in an exact tie.  I had the Oakland Athletics coming in behind them, #3.  As it turned out, the A’s took the Division (96-66) and the Rangers were #2 (91-72, including a loss in the Wild Card playoff) and Angels were #3 (78-84).

Let me just put it straight: the Astros are not a very good team. Their only really bright spot is 2nd baseman Jose Altuve, who at 5’4” is one of the smallest players in baseball.  Keep an eye on veteran Chris Carter, as well as prospect Carlos Correa, who was taken first overall in 2012. Pitching-wise,  Lucas Harrell is the most well-known in the Astros’ active roster. For Nationals fans, you might remember Brad Peacock, who made a few starts for the Nats in 2011, who is also one of their starters.  Peacock has never made the 25 man roster out of Spring Training, but I’m hoping he does this season and gets one of the starting five spots.  Don’t forget former Nats third base coach Bo Porter, who is now the manager.  Mark Appel, taken first in the 2013 draft, is hovering around the Single-A system and will probably be in Triple-A by the end of the year.

Seattle extremely upgraded their roster in 2014, adding Robinson Cano, Logan Morrison, and Corey Hart.  They join ace pitcher Felix Hernandez and solid players Kyle Seager, Hisashi Iwakuma, and Justin Smoak.  Hernandez is arguably still the best player on the team, but Cano, the best second baseman in the business, may be the new face of the Mariners franchise.  Michael Saunders fills in RF for the Mariners after losing Ichiro Suzuki in 2012 to New York.  This is a good team with one of the best minor league systems in baseball, so look for them to rise up in coming seasons.

The Angels look great on paper, with a line-up dominated by All-Stars like Mike Trout, Albert Pujols, Josh Hamilton, Jered Weaver and C.J. Wilson.  They are a team that is capable of winning but they just couldn’t get it together as a team last year and ended up with a losing record. Pujols and Hamilton were not as good in 2013 as in earlier years, but Mike Trout was a superstar.  He finished in AL MVP vote.  A prospect in the Angels’ system is Kole Calhoun, who made his debut in 2013 as a slugging outfielder who also has some speed, and was a factor to Anaheim’s 3rd place finish. The Angels’ outfield is stacked with veterans Trout, Hamilton and Raul Ibanez, so he will get minimal playing time.  The Angels come here to DC in April to take on the Nationals, and I will be making a stop at Angels Stadium on July 26 to see them take on the Tigers.

The A’s are my favorite AL team because they have some really good players and great fans, just like my hometown Nationals. Also, Washington and Oakland are best trading partners, with former Nats Fernando Abad, Derek Norris, Tommy Milone, and Billy Burns now on the A’s roster.  (The Nats roster features former A’s Gio Gonzalez, Jerry Blevins, and former Nats catcher Kurt Suzuki).  After trading Brett Anderson to Colorado in exchange for Drew Pomeranz, Oakland doesn’t have an ace pitcher.  But their hitting  and defense makes up for it. Take a look at their outfield: Coco Crisp made some unbelievable catches in the outfield, Yoenis Cespedes is the reigning the Home Run Derby champ, and Josh Reddick has a cannon for an arm that matches Bryce Harper’s and a beard that matches Jayson Werth’s.  Two big losses to the A’s: Michael Choice, who had some solid September hitting, was traded to Texas, and Grant Balfour moved to the Tampa Bay Rays.  Also,do you remember this amazing catch from Josh Donaldson last year, which was one of the best of the year?

Check out some of the names on this roster: Prince Fielder, Yu Darvish, Elvis Andrus, Shin-Soo Choo, Neftali Feliz, Adrian Beltre, and Jurickson Profar.  Texas is set as one of the most stacked teams in baseball.  Are they a lock for the AL West?  No, because the A’s will give them a run for the title.  In the end, I need to make a pick, and I say that the Rangers win the Division.

Keep reading MattsBats.com this week and next as I continue to analyze the Divisions.  Let me know what you think by adding a comment or tweeting me @MattsBats.