Max Scherzer’s Near Perfect No-Hitter: Bring On The Chocolate Sauce!

Nationals pitcher Max Scherzer tossed a no-hitter against the Pittsburgh Pirates yesterday.  It was amazing, because last week against the Brewers he went 7 innings without giving up a hit, and the only hit of the game was a blooper just over Anthony Rendon’s head that might have been catchable.

Yesterday, he was 1 strike away from perfection, as he had a 2-2 count on Jose Tabata. In a perfect game, a pitcher has 27 straight outs without allowing a batter to reach base.  That means no walks, errors, hit by pitch, just 27 up and 27 down.  Scherzer took his perfect game into the 9th inning with 2 outs.  The outcome was like the squirrel in the Phillies game this week– it all came falling down.

Tabata obviously leaned in on Scherzer’s slider and broke up his perfect game. As you can see in this Vine, it’s obvious that Tabata leaned in to get the HBP and end the bid for perfection.

Here are some thoughts about the historic almost perfect no-no: 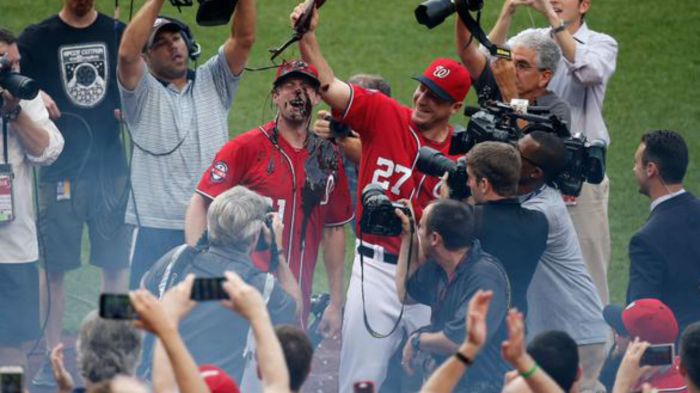