Last week, I attended the Bethesda Big Train Celebrity Summer Camp. The Bethesda Big Train is a Summer Collegiate baseball team in Bethesda, MD. They are a part of the Cal Ripken Collegiate Summer Baseball League, which is a league for college baseball players to improve their skills during the summer. They play at Shirley Povich Field in Bethesda, near Montgomery Mall. Big Train alumni include 2015 All-Star Brian Dozier of the Minnesota Twins, Hunter Renfroe, the 13th overall in the 2013 draft, and Brennan Middleton, a shortstop drafted by the Nats in the 10th round of the 2013 draft.

The best part about Big Train camp is that you get personalized instruction from college baseball players, and get to play games each day on great quality ballparks with the friends you make. At last week’s Nationals celebrity camp, one Nationals player made an appearance at lunch each day. Big Train runs camps all summer, including a free sports journalism camp, where you learn reporting skills and cover the CRSCBL All-Star game.

The camp’s counselors are the Big Train players. We played baseball during the day, and the Nats players came at lunch. The coaches for my age group were: Luis Collazo, a senior pitcher from of Virginia Tech, Josh Thorne, a senior pitcher from Stetson, Justin Morris, a sophomore catcher from Maryland, Tony DiLeo, a junior catcher from Eastern Michigan, Ryne Willard, a senior shortstop from North Carolina State, Logan Farrar, a junior outfielder from Virginia Commonwealth, and Cody Brown, a junior outfielder from Mississippi State. 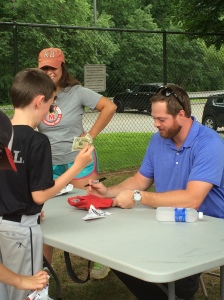 Aaron Barrett, Drew Storen, and Tyler Moore came out to Shirley Povich Field to sign autographs for the campers on Monday, Tuesday and Wednesday.  I got a chance to talk to all of them.  Aaron Barrett was impressed with the camp, which reminded him of the camps he attended as a kid. “I went to a bunch of pitching clinics, a couple college camps where you work on baserunning,fielding, pitching,” he said. “This is real good for you guys because I did the exact same thing when I was your age.”

I thought one of the best opportunities was to get instruction from great athletes and to meet your baseball heroes.

The Bethesda Big Train has games through the end of July. They square off against teams from around the DC region, including teams in Alexandria, DC, Gaithersburg, Herndon, Rockville, and Vienna. The quality of play is very good, and some of these guys may be the future of major league baseball. You can learn more about the camps at bigtrain.org/summercamp. They run other great events during the year, including a charity auction and a celebrity softball game.

Finally, if you missed it, I have a great opportunity to go the Los Angeles this week for the Nickelodeon Kids Choice Sports 2015 Awards.  I have a fundraiser page, which you should please visit. 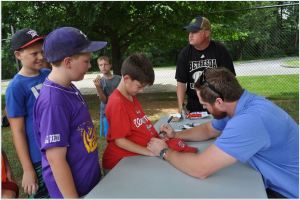 Selfie with Drew Storen. I’m sad that he was snubbed for the All Star Game. 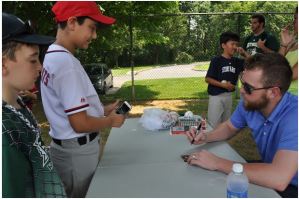