A Biography of Ian Desmond 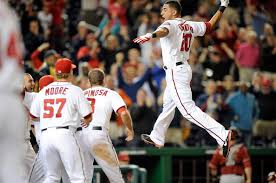 On September 20, 1985 in Sarasota, FL, future superstar shortstop Ian Desmond was born. 27 years later, he got a Silver Slugger and selected for the MLB All-Star game.

When Ian Desmond was in his sophomore year in Sarasota High School, scouts from the Montreal Expos came and saw Ian play. On June 6, 2004, he got drafted. That was about 2 months before I was born.

In the later part of 2004, he found a spot on the Gulf Coast Expos, with a batting average of .277 and a homer and 27 RBI. He played 4 games with the Class A Short Season Vermont Expos and surprisingly had a .250 batting average with a homer and a RBI. The next year, he batted .247 with 4 homers and 23 RBI for the Class A Savannah Sand Gnats. Then, after Montreal became the Washington Nationals, he hit for a .256 average with 3 homers and 15 RBI in Potomac. He batted .354 in AAA Syracuse and in June he was The Show: the Major Leagues.

September 10, 2009 was a big day for Ian. Ian was turning 24 in a week and 3 days, and Ian made his major league debut. He hit his first MLB home run that day. Imagine that– hitting a home run on your major league debut against the Nationals’ arch rivals, the Phillies.

About three years later, Desmond had his breakout season with the Nats.  He changed his number from 6 to 20 to honor Frank Robinson who was number 20 for the Nationals.  He went on a tear in 2012, dominating for the Nats both offensively and defensively.  Some people thought he could be NL MVP.  He got selected to the All-Star game in 2012, but an oblique injury stopped him from playing.  It was very disappointing for the fans that Desmond couldn’t play in the All Star Game, but it must have been even more disappointing for him and his family after working so hard for so many years.  But Desmond knew that he needed to get better so that he could be in top shape for the rest of the season and possibly the post-season. When the Nationals played their first home playoff game, Desmond threw out the first pitch to the other number 20, Frank Robinson.

Ian Desmond is loved for how much he interacts with the fans before games.  He signs autographs  and usually gives a practice ball to someone the crowd.  Sometimes a big line forms in the aisle to get his autograph even if it isn’t Signature Sundays.  Besides his playing skills, this is why I admire Desmond so much.

Off the field, Desmond is the father of 2 children. He has another baseball player in his family, Josh Roenicke, a pitcher for the Twins, and also Ron Roenicke who coaches the Brewers.  And he also reads MattsBats.com!