Home › Uncategorized › Behind the Scenes of “Nationals At 10” at the Newseum!

Behind the Scenes of “Nationals At 10” at the Newseum!

Today, the exhibit called “Nationals at 10” opens at the Newseum in downtown Washington, DC.  The exhibit contains artifacts from the biggest moments in the first 10 years of Washington Nationals history. The Newseum is also hosting a Family Day on Saturday (Aug. 1) as part of its Opening Weekend where you and the rest of the family can be some of the first to see the exhibit.  Plus, there will be batting cages, arts & crafts, and other fun activities for the whole family to do.  Admission is $10 for adults, but the best part is kids are free all summer long.  Click for all the information on the event. And please keep reading to the end because I have some prizes to give away.

If you are active on social media, you probably noticed people in your timeline posting pictures from the Newseum Nights event last night.  These people got to see the “Nationals at 10” exhibit before it officially opens this morning. 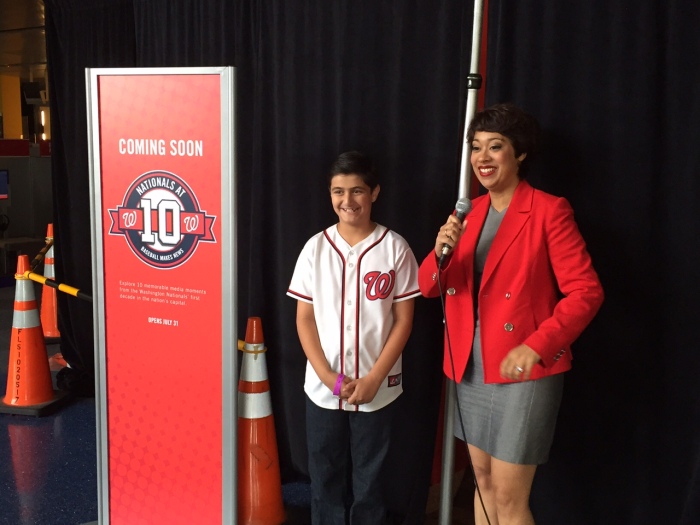 But guess who was the very first person to see “Nationals at 10”?

Earlier this week, the Newseum gave me a special sneak peek tour of the exhibit and we recorded a video podcast that will be out soon. It was so special that I wasn’t allowed to post pictures or talk about what I saw in the exhibit because it was “embargoed” until the exhibit opened to the public.  But now that it’s open, I can tell you all the great things I saw in “Nationals at 10,” and why I think it’s a great exhibit for Nationals and all baseball fans.

With all of the Nats artifacts, the exhibit feels like home to me. Everything I could have imagined would be there was there.  But they even had things I didn’t expect to see, like Teddy the Racing President’s shoes from the first time he won the 4th inning President’s Race in 2012. They also had the pitching rubber and rosin bag from Stephen Strasburg’s major league debut, where he K’d 14 Pirates batters.

I also was not expecting to see a lineup card from the last game at RFK Stadium, but that was an important “media moment” in Nationals history because it meant the Nats would be moving to a new ballpark built in DC. 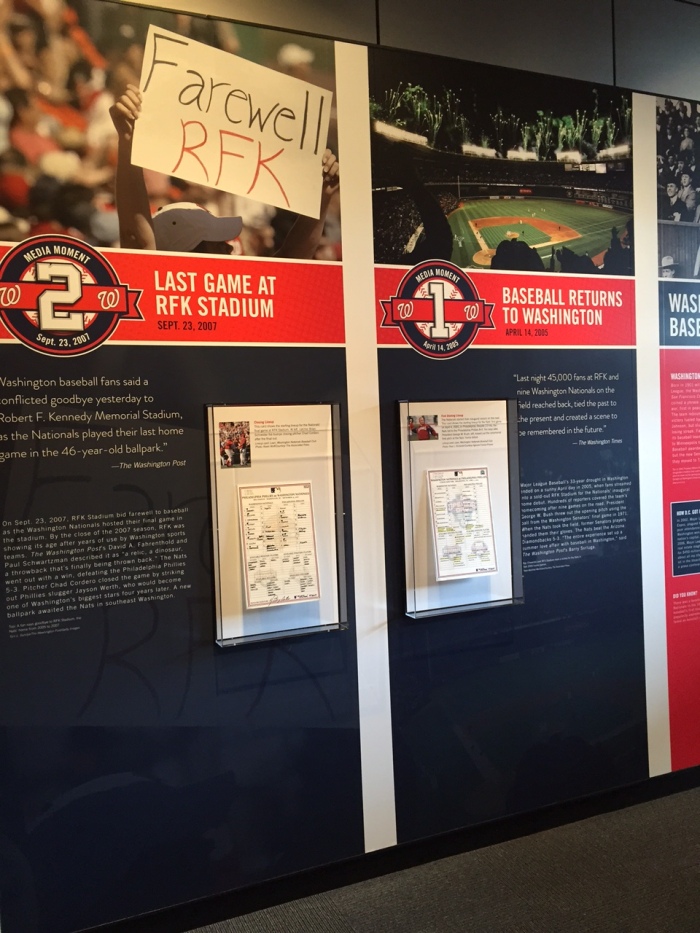 I also wasn’t expecting to see a jersey autographed by President Barack Obama.  They have the jersey and jacket he wore when he threw out the first pitch at Nats Park on Opening Day 2010, a presidential tradition.  They did not have the hat the President was wearing that day, because, if you remember, it was a Chicago White Sox hat.

I have to say, though, that my favorite display is all the things they collected from Bryce Harper’s first major league game back in 2012. They had a helmet, a hat, a base (with the Los Angeles Dodgers logo on it), and other things from Harp’s debut at Dodger Stadium in early 2012.  Harper was an important part of the historic 2012 Nationals team.  He was the most talked about player in the game and National League Rookie of the Year, and he helped lead the Nationals to their first postseason appearance.

There is definitely a lot of Nationals memorabilia to see at the Newseum.  It’s a very well done exhibit that has something for everyone.  I hope to see you on Saturday when I visit “Nationals at 10” for Family Day.  Even if you do make it on Opening Weekend, be sure to tweet to me @MattsBats with your favorite part of the exhibit.

The exhibit closes on November 29, so there is plenty of time to see it.  I just gave away 2 tickets to see the exhibit, and I have some more free Newseum passes and other prizes to give away, thanks to the Newseum. So, here’s another PRIZE GIVEAWAY! To keep your drinks cold this summer, I have some “Nationals at 10” bottle koozies to give away.  Retweet the tweet below and I’ll pick a couple of winners to give prizes to.

#Natsat10 exhibit at @Newseum is “awesome!” Go to Family Day on Saturday; kids are free all summer. @Nationals#Natspic.twitter.com/bP76Eu3JAK

Also keep an eye out on my Twitter (@MattsBats ) and the Newseum Twitter (@Newseum) and website (newseum.org) for the video podcast we recorded earlier this week.  It should be coming out soon.