On Wednesday, November 4, I attended the third annual Bob Feller Act of Valor Award Ceremony at the Navy Memorial in Washington, D.C.  This year’s recipients were George Brett, Hall of Fame 3rd baseman for the Royals; MLB catcher from the Milwaukee Braves Jonathan Lucroy, and Navy Chief Petty Officer Genell Cody.  The Foundation also honored Staff Sergeant Rene Segura of the US Marine Corps with the Jerry Coleman Award and the USS Carl Vinson’s CSADD Chapter and the HOPPER Information Services Center’s CSADD Chapter with the Peer-to-Peer Award.  Among the VIP guests at this year’s ceremony was last year’s winner Tommy Lasorda, Senator Ron Johnson from Wisconsin, John Dalton, the 70th Secretary of the Navy , Sergeant Major of the Marine Corps Ron Green, and Force Master Chief C.J. Mitchell.  It was so exciting to be there again this year (also be sure to check out the posts from 2013 and 2014). 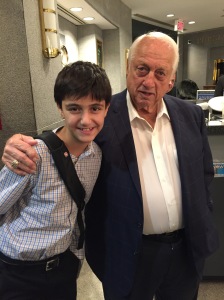 The Act of Valor Award honors Bob Feller,  a Hall of Fame pitcher for the Cleveland Indians from 1936 to 1956. Feller was the first American professional athlete to enlist in the military after the bombing of Pearl Harbor.  Feller threw no-hitters in 3 different years, including the only no-hitter ever thrown on Opening Day. “Rapid Robert” Feller was also called “The Heater from Van Meter” after his hometown of Van Meter, Iowa because he threw some of the fastest fastballs in baseball history.  He pitched 3,287 innings, threw 44 shutouts, and rang up 2,581 strike outs in his career, which was interrupted by serving 3 years as a gun captain on the U.S.S. Alabama in the Navy during World War II.

They also gave award new awards: the Jerry Coleman Award, named after legendary San Diego Padres broadcaster and former Yankees 2nd baseman Jerry Coleman, who passed away in 2014.  Coleman served as a colonel in the Marines during WWII and Korea, the only MLB player ever to serve in both wars. He is also a member of the National Baseball Hall of Fame as a Ford Frick winner.  The Jerry Coleman Award honors a US Marine Non-commissioned Officer who has shown unyielding support for the Marines and the United States of America.

The Foundation also awarded the first Peer-to-Peer Award to the USS Carl Vinson’s CSADD Chapter and the HOPPER Information Services Center’s CSADD Chapter. Both honorees are groups of sailors ages 18-25 who demonstrate honor, courage, and commitment. They also encourage peer-to-peer mentoring and to reduce personal destructive decision making. The award was given to teams of sailors who participate in the Coalition of Sailors Against Destructive Decisions.

George Brett is the Hall of Fame former 3rd Baseman of the Kansas City Royals.  Brett played for the Royals from 1973 to 1993. He won a World Series in 1985, and his number 5 is retired at Kauffman Stadium.  Brett was honored for his actions visiting veterans in the Kansas City Area and taking part in ceremonies at Ft. Riley and Ft. Leavenworth in the state of Missouri.  Because his Kansas City Royals won the 2015 MLB World Series, Brett was not able to attend the ceremony in DC this year. 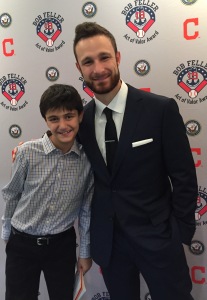 Jonathan Lucroy is a catcher for the Milwaukee Brewers. Lucroy was honored for his participation in the Honor Flight, which sends WWII and Korean War veterans to DC to visit the war memorials, and Fisher House Wisconsin, which builds houses for sick and injured veterans at the Milwaukee VA (Veterans Affairs) hospital so they do not have to rent out a hotel. When asked what it feels like to win an award named after Bob Feller, Lucroy said “It’s humbling. I think that it’s a huge honor considering the other names nominated for this award.” Lucroy was selected as an MLB All-Star in 2014.

Chief Petty Officer Genell Cody is a Chief Hospital Corpsman in the United States Navy of the Naval School Explosive Ordinance Disposal at the Eglin AFB in Florida.  She has performed many lifesaving EMT treatments and multiple combat deployments. Chief Cody is active in serving the wounded warriors and disabled veterans. She also is very active in memorializing 9/11 victims. “It feels both exciting, overwhelming, and I’m honored that my fellow Chiefs thought so highly of me to nominate me,” Chief Cody said.

Staff Sergeant Rene Segura is the inaugural recipient of the Jerry Coleman Award.  Sgt. Segura joined the Marines in May 2003, and he is stationed in Okinawa, Japan.  In his free time, he helps the homeless and seniors there. When I asked Sgt. Segura what winning this award feels like, his response was one word: “Awesome.” He received his award from Sergeant Major Ron Green of the Marine Corps.

As this week we celebrate Veterans Day, I dedicate this post to the service men and women who risked their lives and made personal sacrifices.  Thank you for your generosity to the country.  Learn more about the Bob Feller Act of Valor Award at http://www.actofvaloraward.org/