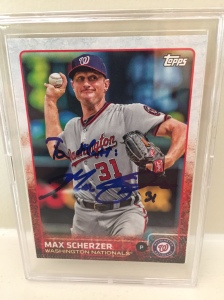 My autographed Max Scherzer card from the 2015 Cards for a Cause program.

Last year, during his first season with the Washington Nationals, ace of the staff Max Scherzer launched a charity called Baseball Cards for a Cause.  Max autographed fans’ baseball cards in exchange for a donation to the Washington Nationals Youth Baseball Academy.  This was a fundraiser Max and his wife, Erica May-Scherzer, started when Max was in Detroit on the Tigers, and I think that it’s great that the Scherzers brought it with them to Washington. I participated in the fundraiser last year, and thought it was a fun way to support a great cause.  I now have in my collection the autograph of one of baseball’s best pitchers, and it’s even personalized to me.  I had a chance to talk with Max and Erica about their charities, and Max answered the most important questions about his autograph signing programs.

This year, the Scherzers are expanding their autograph and fan engagement programs to help even more charities.  In addition to participating in Cards for a Cause again this year (more details on the expanded program below), there are three more ways he’s helping the community: Autographs and Athletes, Strike Out Modern Slavery, and The Scherzer Showdown.  I’ll explain each one below and the different worthy causes each supports.

Autographs and Athletes – Autographs and Athletes is like last year’s Baseball Cards for a Cause, but kicked up a notch.  Now, fans seeking autographs are not limited to sending in a baseball card.  You send in your favorite items, like a baseball, photo, or ticket stub, and Max will sign it and return it to you.  All the details are online here: polarisproject.org/autographs-athletes  All the money raised supports a charity called Polaris, a leading charity in the global fight to eradicate modern slavery.  I asked Erica why they chose to support Polaris with the Autographs and Athletes program: “I’m an ambassador for the organization and have worked closely with them for the last year.  I cannot say enough positive things about how much I love Polaris and how impactful the work they are doing is.  Human trafficking is an issue that so many people are unaware or misinformed of, despite the fact that it impacts over 21 million people globally.  By supporting Polaris with these fundraisers Max and I can not only raise money for the National Human Trafficking Hotline (which Polaris operates), but also help bring attention to the cause.”

Fans paying close attention on Twitter may have noticed recently that Max has already started signing some of the items that have been mailed in.

.@Max_Scherzer is in the house! He’s signing fan memorabilia to support Polaris. Get yours: https://t.co/aDYsW32roG pic.twitter.com/HW51HKZr0e

In a recent interview, Max told me, “I’m signing them in groups so my fans can get their items sooner.  I just signed 120….Depending how many more come I’ll sign one or two more times” before the season ends.  So, I wanted to know what it’s like signing all those cards.  He can’t get a cramp in his pitching hand!  “It doesn’t really hurt my hand too much since I’m used to signing all the time,” Max told me.  “I can sign about 500 items in one sitting before my hand hurts and I’m mentally fatigued.”

Strike Out Modern Slavery– Also in support of Polaris, Max is organizing a pledge drive for each strike out this season.  As Nats fans know, Max can serve up quite a few strikeouts– as many as 20 in a single game!  Fans are encouraged to make a pledge on the website (as little as $0.31 a strikeout), and Max and Erica will match all donations up to $25,000.  Everyone who pledges is entered into a drawing to win Nationals prizes like Scherzer-signed baseballs and Nationals tickets. For more information and to pledge a donation to Polaris, visit pledgeit.org/maxscherzer.  So far, this charity has raised just under $10,000.

The Scherzer Showdown– For the second year in a row, Max Scherzer and fellow Nationals teammates are hosting a fantasy football draft benefiting the Washington Nationals Youth Baseball Academy.  Sponsored by the Washington Nationals Dream Foundation, the Youth Baseball Academy (“YBA”) teaches DC area kids about how to stay healthy and have a good education. The YBA integrates the STEM curriculum into baseball, like teaching math using Nats’ player batting averages.  “They are such a well run organization that is focused on at-risk youth development,” Erica told me.  “I was very excited when Max signed with a city that had a youth academy.  Sports have such power beyond the field and can truly make a life changing difference in countless kid’s lives.”  When you sign up for the Scherzer Showdown, not only do you attend a fantasy football draft with Max and his teammates, but fans play fantasy football with the players all season.  This is such an awesome idea for a fundraiser, and a great way for players to interact with their fans. For more info and to sign up for the draft, visit scherzershowdown.com!

Cards for a Cause- The Cards for a Cause autograph program is back for 2016, but a little different this year.  By making a donation to the Nationals Dream Foundation, fans will receive a limited edition Dream Foundation baseball card, presented by TOPPS, which will be autographed by your choice of Max Scherzer, Jonathan Papelbon or Shawn Kelley.  It will also be authenticated by MLB. At the end of the regular season, Scherzer, Papelbon and Kelley will will match all funds raised by their individual baseball card with a charitable donation of their own.

It’s great to know that the stars of our hometown baseball team like to give back to the community and to charities that mean a lot to them. I strongly encourage you to help them out, and maybe get a nice autograph for yourself or a friend.