More Morse as a Mariner 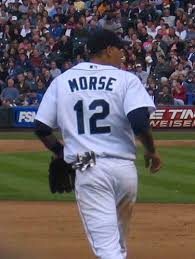 It was about 6:30 pm last night when we heard the news. After 4-5 months of nonsense about trading, Michael Morse was dealt to the Seattle Mariners in a 3-way deal with the Oakland A’s. The Oakland A’s traded former Nats prospect  A.J. Cole (who the Nats traded last year to Oakland for Gio Gonzalez to come to DC), Blake Treinen, and a Player to Be Named later. Oakland receives catcher John Jaso from the Mariners.

Morse comes to a Seattle outfield that already includes Michael Saunders, Franklin Gutierrez, Casper Wells, Eric Thames, Carlos Peguero, Raul Ibanez, and Jason Bay. So maybe Morse will not be an outfielder.  More likely, he’ll be a DH.  But it seems like Morse wants to be a position player, and people on Twitter have been saying that he should become a SS.

The trade is bad for the fans in DC who loved his energetic approach and the jokes he played off the field.  Morse was in charge of the shaving cream pie and Gatorade business after Nats wins. Fans also loved his walk up song, 80’s hit “Take On Me” by A-Ha. Fans sang it even after it was shut off by the Public Address system.  He was fun to have around and definitely contributed to the NATITUDE last year.  He had the only 2 grand slams of the season, and 1 of them he had to do the famous do-over that was one of baseball’s most memorable moments.