When you get into the Major Leagues it’s a major accomplishment like hitting a walkoff grand slam. That’s what happened to outfielder Bryce Harper when he got drafted by the Nationals in 2010. He was only 17 years old and drafted into the Nationals’ farm system! Most kids that age would be focusing on college and riding skateboards across their neighborhood, but Bryce was in Woodbridge, Virginia as a professional baseball player.  As he stepped into the batter’s box as the youngest professional player, baseball fans all over the country and the world were waiting for the his legacy to begin.
Bryce Aron Max Harper was born on October 16, 1992. From what I know, there wasn’t much to do if you’re 6-7 years old and you live in in Las Vegas.  So the neighborhood streets and parks are  perfect for a little pickup game or scrimmage. It turned out that Bryce was a great player in the games, and everyone probably wanted him on their team for the elementary or middle school kickball or baseball team. But high school is where people started to notice he had something special.  Bryce joined the baseball team at his high school, Las Vegas High School.  Most people don’t know this, but he was a catcher, not an outfielder.  He loved baseball so much that he would even sleep with his baseball bat. 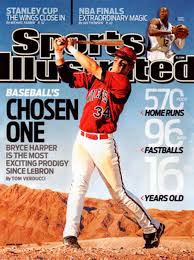 When everyone was deciding about what to do after high school and going to college, Bryce was trying to get into the Major League draft. Bryce was on the cover of Sports Illustrated magazine at only age 16!  Bryce’s parents, and brother and sister knew that he Bryce had something else exciting waiting.
The day was June 4, 2010. The place was Secaucus, NJ. The price: priceless. That was the 2010 MLB first-year player draft. Bryce watched and waited. At 7:00 pm, it began. Fifteen minutes later, Bryce Harper was a Washington National, drafted first overall!  A month later, he was wearing the Potomac Nationals uniform. He was already a star.  He rose quickly to the Hagerstown Suns.  Then he went on to the Syracuse Chiefs, which are the Nationals’ triple-A affiliate from upper New York state near Buffalo.  Bryce Harper was only 19 years old when he joined the Chiefs.  People expected him to do well and eventually become a major leaguer, but only 23 days later it came true.
Early the Nationals suffered a bunch of injuries and they needed Bryce’s help.  Mike Rizzo and Davey Johnson made the call on April 28: he was in the lineup the next day against the Dodgers. He had to fly from Syracuse to Los Angeles, but it was totally worth it. He played hard, and he got a double, and a sac fly. However, Matt Kemp hit a walkoff home run that day.
When he debuted at Nationals Park he got a huge ovation.  A few games later he turned up the heat.  Phillies Pitcher Cole Hamels intentionally plunked him with a ball, which was not nice.  But Bryce stole home off him off a pickoff attempt.  This was on national TV, so everyone in America got to see the way he plays ball.  Like FP Santangelo says, Bryce plays “run til they tag you,” which means play like you do when you play with your friends and just have fun.  That is what makes the fans excited.
He’s the best and youngest in the MLB.  He was voted into the All Star Game as the youngest position ever.  He also won the National League Rookie of the Year called the Jackie Robinson Award. Bryce Harper is giving the Nationals fans major energy and fans all over the world love him.  BRYCE IS THE KID!
Bryce talks about his family and the support they give him.  He has a brother who is also a pro baseball player in the Nats organization.  He also got a puppy last year named Swag. I got to meet Bryce at his baseball camp.  He talked to the kids and taught us how to play better.  One funny thing is that when the Red Porch Report published my interview, they called it Move Over Bryce, There’s a New Kid in Natstown.  I can’t wait for the season to start to see what the Kid does next.