Nats Start Sept. With Come From Behind Win, #PhlattenThePhillies Tonight 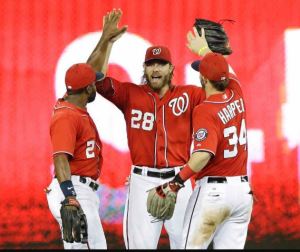 It took a gapper to win it. A low line drive off the blazing hot bat of Jayson Werth brought Ryan Zimmerman home in the eighth inning, the go-ahead run in the Nats’ 6-5 win over the Mets on Sunday.  This was a much needed win after Wild Card challengers, the Arizona Diamondbacks and Cincinnati Reds, lost their Sunday games.

The Nats moved up 0.5 games on Arizona.  The Nats now stand a half game behind the D-backs.  The next 3 Nationals series are against the Phillies, Marlins and Mets. The Diamondbacks take on the Blue Jays, Giants and Dodgers.  That’s a harder schedule than the Nationals, and they take on the Dodgers 7 times before the season ends.

This could be the biggest series so far for the Nationals in the 2013 season.  If the Nats reign over their NL East opponents, they can match or even pull ahead in the Wild Card standings.

What about the current leader for the second Wild Card spot?  We know that the first Wild Card spot will be decided by the the outcome of the NL Central division race (either the Pirates or the Cardinals).  Right now, the Cincinnati Reds are 6.5 games ahead of the Nationals for the second ticket to the post-season.  Cincinnati, however, plays the next six games against the Dodgers and Cardinals!  These are two of the best teams in the league, and hopefully they can pounce on the Reds and allow the Nats to pull ahead.  We need the Reds to lose their games and the Nationals to win theirs.

This could get interesting.  The Reds face some hard teams while the Nationals face a few teams I think they can beat.  But after that tough series, the Reds get to coast against the Milwaukee Brewers, Houston Astros, and the Chicago Cubs.  The Nationals end their year against the Braves (Nats are 0-6 vs. ATL at home- ouch!), Cardinals, Marlins and Diamondbacks.  So any gain the Nationals pick up this week needs to last.  That season-ending Diamondbacks series in Phoenix could be very, very interesting.  Stay supportive Nats fans and show your #MATT-itude!